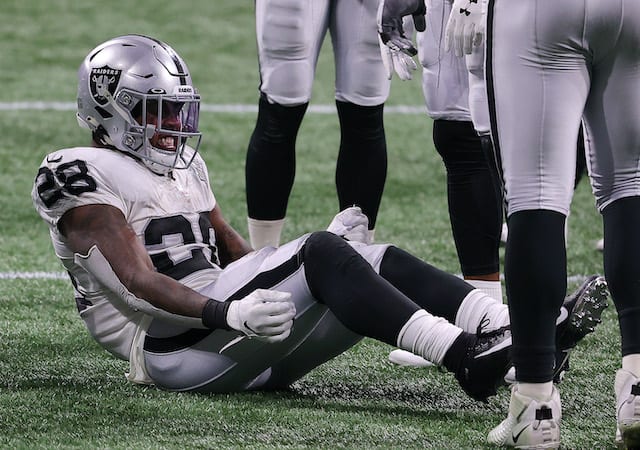 The Las Vegas Raiders put of their worst performance of the season in Week 12, traveling to take on a 3-7 Atlanta Falcons team and leaving with a 43-6 loss to fall to 6-5 on the season.

It looked as if the Raiders had been turning a corner in recent weeks but came crashing back to earth with this poor performance against the Falcons.

The offense seemingly couldn’t anything going, turning the ball over five times while also going 3-of-12 on third down.

Josh Jacobs had no holes to run through all day, carrying the ball just seven times for 27 yards in addition to three receptions for 17 yards. The Raiders’ star running back was forced to leave the game due to an ankle injury, although according to Ian Rapoport of NFL Network, it is not believed to be serious:

Tests confirmed that it’s just a sprained ankle for #Raiders RB Josh Jacobs. He has a chance to play this week, depending on how he feels. So, good news and what they expected. https://t.co/hCGp45uUqe

Jon Gruden then confirmed on Monday that Jacobs is dealing with a sprained ankle, per Paul Gutierrez of ESPN:

#Raiders Gruden said Josh Jacobs is being evaluated for ankle sprain…confident he’ll be able to play.

Jacobs has played in all 11 games for the Raiders to this point, rushing for 782 yards and nine touchdowns with 27 receptions for 175 yards.

He has been the main focal point of the Raiders’ run-first offense, so if he is forced to miss any time then that would be a big loss, even with the winless New York Jets on the schedule in Week 13.

If Jacobs is unable to go this weekend against the Jets, then Devontae Booker, who has been solid in limited action this season, would take over as the Raiders’ starter. Jacobs is as tough as they come though so there is no doubt he will do everything his power to be on the field.