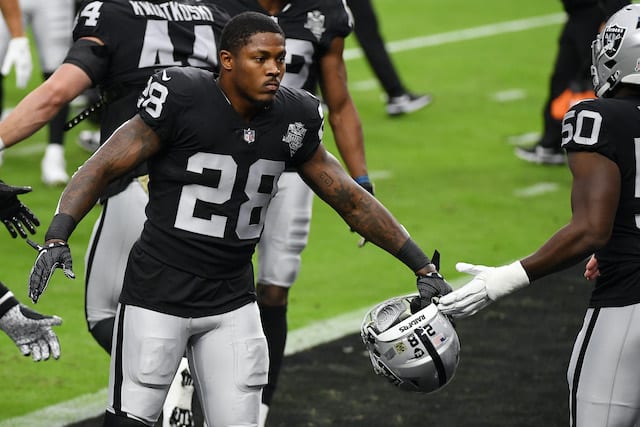 As disappointing as the Las Vegas Raiders’ 2020 season was, one of the bright spots was running back Josh Jacobs.

Coming off an outstanding rookie season, Jacobs looked to prove it was not a fluke by matching his production in his second year with the Raiders.

It is clear that Jacobs is one of the bright young stars for this franchise to build around, although he got into a little trouble shortly after the season ended when he was arrested on DUI charges after a crash near the Las Vegas airport.

Now that some time has passed though, Jacobs’ lawyer revealed that he actually wasn’t charged with a DUI, per Ian Rapoport of NFL Network:

#Raiders RB Josh Jacobs, who was involved in a single-car accident last week, was charged with failure to exercise due care, per his lawyers. He was not charged with a DUI by the Clark County DA. Statement: pic.twitter.com/nWAvHy74ON

This is certainly good news for Jacobs and the Raiders as a DUI charge would have been much more severe and likely would have led to discipline both on and off the field.

Jacobs has proven to be a model citizen so far in his career with the Raiders, doing a ton of work to help out the local community. While this was obviously a mistake, hopefully he can learn from it and move on so it doesn’t happen again in the future.

Coming off an 8-8 season in which they missed the postseason, the Raiders have a lot of work to do to get back to greatness, and Jacobs will be one of their leaders in making that happen in the coming years.

The post Raiders News: Josh Jacobs Charged With ‘Failure To Exercise Due Care,’ Not DUI After Crash In Las Vegas appeared first on Raiders Newswire.