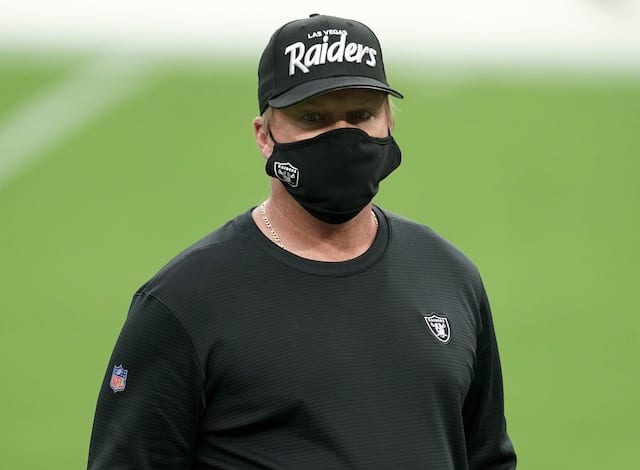 Through the first four games of the 2020 NFL season, the Las Vegas Raiders have struggled defensively. Head coach Jon Gruden and defensive coordinator Paul Guenther have tried to address the reasons for their issues, but have not yet found a solution as the team’s schedule has been unrelenting in recent weeks.

The Raiders defense ranks 21st in total yards allowed, 20th against the pass and 24th in total points. However, the even bigger issues lie in the ground game, where Las Vegas ranks 25th in rush yards allowed. Nothing about these numbers offer any silver lining. However, Gruden has not given up on Guenther as the defensive coordinator.

After a loss to the Buffalo Bills in which they gave up 30 points for the third time this season, Gruden reiterated his trust in Guenther, according to Adam Hill of the Las Vegas Review Journal:

“I know he’s a good coach,” Gruden said on a video conference with reporters Monday. “I know the mistakes are very correctible and we’ll correct them.”

While some accountability must be placed on the coaches for the consistent problems on defense, it’s hard to completely blame Guenther. The Raiders tackling has been subpar through the first quarter of the season, and while injuries have been an issue, they’ve been relatively fortunate compared to other teams.

In addition, the Raiders schedule does not let up for another few weeks. Their next three matchups are the Kansas City Chiefs, Tampa Bay Buccaneers, and Cleveland Browns, all of whom are among the leaders in the NFL offensively. If they want to avoid dropping to 2-5, there are some things that need to be adjusted immediately, or else it may be too late for an end-of-season playoff push.

After the Raiders Week 3 loss to the New England Patriots — their first of the season — Gruden spoke about needing to clean up mistakes on the defensive end.

The focus of these fixes were with regard to tackling and players being out of their gaps, two things that can be easily fixed over the course of a season.