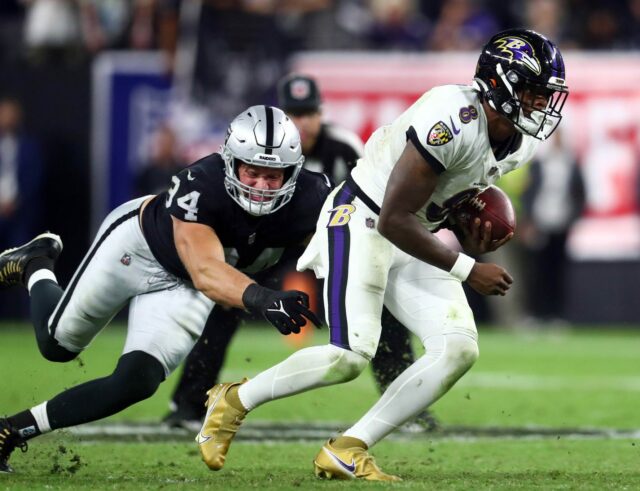 The Las Vegas Raiders were able to climb out of an early 14-0 hole and pick up an impressive 33-27 win against Baltimore Ravens.

It was the first regular-season game with fans at Allegiant Stadium, and the Raiders delivered an amazing performance for the Silver and Black faithful in attendance. Derek Carr and the offense were able to keep up with the Lamar Jackson-led Ravens offensively, while defensively, the unit made plays when the team needed it most.

Las Vegas looked to have the game in hand as they were in the red zone during overtime, but a false start penalty that led to a Carr interception gave Baltimore life. However, the Ravens and Jackson turned the ball over themselves after Carl Nassib came up with a strip-sack. Carr then made up for the miscue by finding a wide-open Zay Jones in the end zone.

Head coach Jon Gruden gave Nassib his due, praising the defensive end for making the play and stepping up. “That is big. He made the big play at the end of the game. I think Gerald McCoy got hurt, Yannick [Ngakoue] was out, playing Lamar Jackson, this guy is a magician back there. He creates so much offense unscripted. [Defensive Coordinator] Gus Bradley did a great job, he and his staff. Give credit to [defensive line coach] Rod Marinelli and certainly Carl Nassib, he has had a great training camp and we are going to need him obviously moving forward.”

Nassib made history when he became the first openly gay NFL player to appear in a game, and he capped off his night with the play of the game. Nassib has largely underwhelmed since signing with the Raiders, but his play against the Ravens should inspire some confidence about his production going forward.

The offseason talk revolved around the defense, and they showed the league that they are no longer the same woeful unit they have been in years past. However, Nassib and the Raiders do not get much of a break as they will take on a potent Pittsburgh Steelers offense on the road in Week 2.