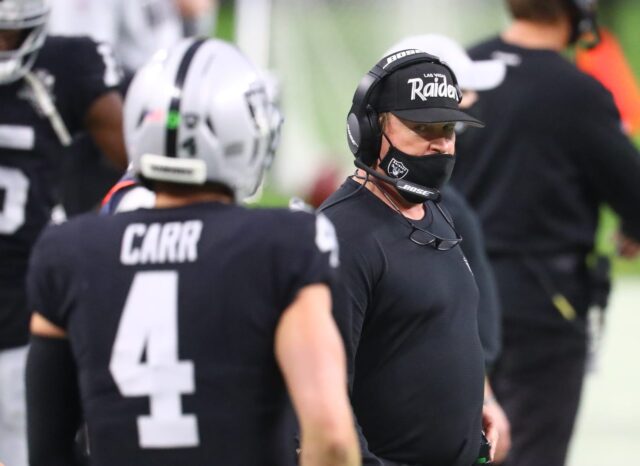 The return of head coach Jon Gruden to the Las Vegas Raiders came with plenty of hype that a step was finally taken in the right direction.

Unfortunately, things got off to a rough start for Gruden following some questionable trades and draft picks. While the hiring of former NFL analyst Mike Mayock as the new general manager was viewed as an intriguing move by the Raiders, the pair have failed to get over the .500 hump over the last two seasons.

Their stint has been marred by more criticism surrounding their draft picks and the consecutive late-season meltdowns. Regardless, the Raiders are optimistic that there is some credence to their playoff hopes following another busy offseason.

Mayock says he and Gruden are fully embracing their playoff expectations going into the 2021 NFL season, Myles Simmons of NBC Sports:

“We’ve assembled 53 players. We think we’re going to be a pretty good football team,” Mayock said. “We’re not hiding from expectations. I think Jon and I would both tell you that we feel like we need to be a playoff team this year. And I don’t think there’s any doubt about that. And you guys are all going to put that in your headlines and I understand it. But that’s what the expectation is. We think we’ve done the infrastructure work necessary to put us in position. We’ve got to take care of business.”

Mayock is still all too aware of the media and its workings, especially for a high-profile team like the Raiders. But, of course, this comes with the territory after coming up short in disastrous fashion over the last two seasons.

This team has not been top the playoffs since 2016, and the front office is well aware of what a postseason berth will mean for its new host city in Las Vegas. But, more importantly, it will be a strong indicator that the Silver and Black are finally heading in the right direction after a difficult start from Gruden and Mayock.

The Raiders stormed out to a 6-3 record last season before losing five of their last seven games. With the regular season extended by one game, Gruden must find a way to avoid yet another slump in the second half of the year.

Although Las Vegas has combatted this by shoring up some veteran experience to the roster, they will still have their work cut out in an improved AFC West Division.