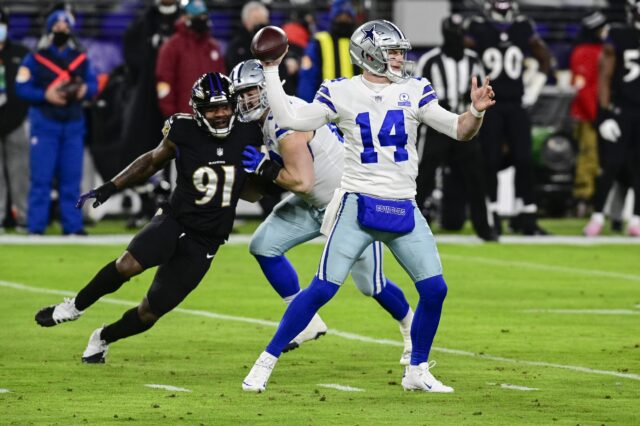 The Las Vegas Raiders added a boost to their pass rush with the signing of former Pro Bowl defensive end Yannick Ngakoue in free agency.

The Raiders have put an emphasis on revamping their personnel along the defensive line so far this offseason. They have high hopes that the addition of Ngakoue will provide just the kind of spark they need on the edge.

The move made plenty of sense given Ngakoue’s connections in Las Vegas. Not only is he accustomed to playing under defensive coordinator Gus Bradley, but he will also be reuniting with his former college teammate and defensive tackle Quinton Jefferson to the mix.

Head coach Jon Gruden feels his experience and production in the past make him an ideal fit in Bradley’s scheme, per ESPN’s Paul Gutierrez.

“He’s an excellent pass rusher, obviously,” Raiders coach Jon Gruden told ESPN.com. “He has experience in our system — with our defensive coordinator — and I think he’s at a time in his career where he can help lead our young defense.”

It is easy to see why Gruden is so optimistic about the make-up on the defensive side of the ball. He is hoping that the sense of familiarity should help pay some dividends for a potential resurgence from this group in the 2021 NFL season.

Bradley served as the head coach of the Jacksonville Jaguars when Ngakoue was selected in the third round of the 2016 NFL Draft. He put up big numbers as a rookie with 23 tackles, 8.0 sacks, four forced fumbles, and an interception.

Bradley then took his 4-3 scheme to the Los Angeles Chargers in 2017 where he eventually established one of the strongest pass rushing duos in the league between Joey Bosa and Melvin Ingram. He is now looking to replicate that success with a trio of edge talent in Ngakoue, Clelin Ferrell and Maxx Crosby.

The onus will fall on Bradley to determine how best to utilize each player’s skill set. After all, the Raiders made quite an investment in Ferrell after taking him with the No. 4 overall pick and Crosby continues to prove himself as a steal with 17.0 sacks through his first two seasons.

Meanwhile, Ngakoue still managed to post 8.0 sacks despite playing for two different teams during the 2020 campaign. There is no question that he is hoping to take advantage of the newfound stability in Las Vegas with a big year.