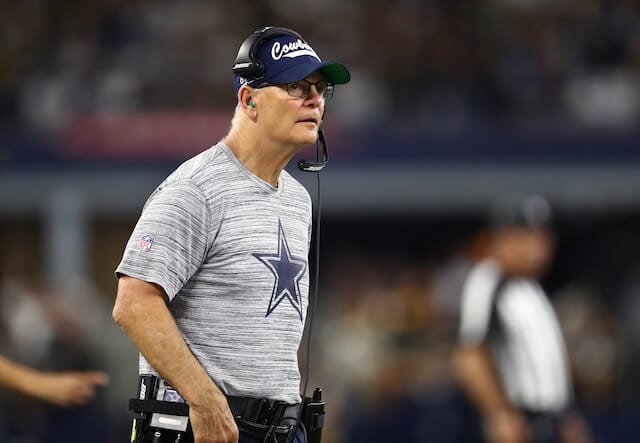 The Las Vegas Raiders took a step back in Week 14, suffering an embarrassing 44-27 loss to the Indianapolis Colts to fall to 7-6.

The Raiders entered the matchup as one of the worst defensive units in the league, and the Colts exposed their deficiencies by gashing them through the air and on the ground. Jonathan Taylor burned Las Vegas for a career-high 150 rushing yards and two touchdowns, while T.Y. Hilton continued his last-season resurgence and recorded five receptions for 86 yards and two touchdowns of his own.

Derek Carr did his best to keep pace as he threw for 316 passing yards and two touchdowns, but was unable to overcome his defense’s inability to get stops. The Colts found little resistance trying to move the chains, and controlled the pace of play throughout the afternoon.

Immediately following the game, the Silver and Black announced they fired defensive coordinator Paul Guenther and named Rod Marinelli as the interim. According to Vincent Bonsignore of Las Vegas Review Journal, head coach Jon Gruden had high praise for Marinelli and what he is hoping to see out of him:

.@Raiders HC Jon Gruden on interim DC Rod Marinelli: “He’s one of the great teachers and motivators in this business.”

.@Raiders HC Jon Gruden: “We need a new voice right now and Marinelli is gonna give it to us.”

The Raiders’ defensive unit is young and talented, but Guenther was unable to get the most of out of his players. There have been numerous breakdowns and questionable coverage calls throughout the 2020 season, and this outcome is not surprising given the frustrations that have reportedly been building after each loss.

Marinelli brings a wealth of experience along the sidelines, having recently served as the Dallas Cowboys’ defensive coordinator and defensive line coach. Gruden brought him in to reprise his role as a defensive line expert, but will now give him a chance to oversee the defense as he sees fit to close out the season.

With only three weeks of the 2020 season remaining, the Raiders’ playoff hopes are fading but hopefully Marinelli is able to rejuvenate a unit that should be better than they have performed so far.