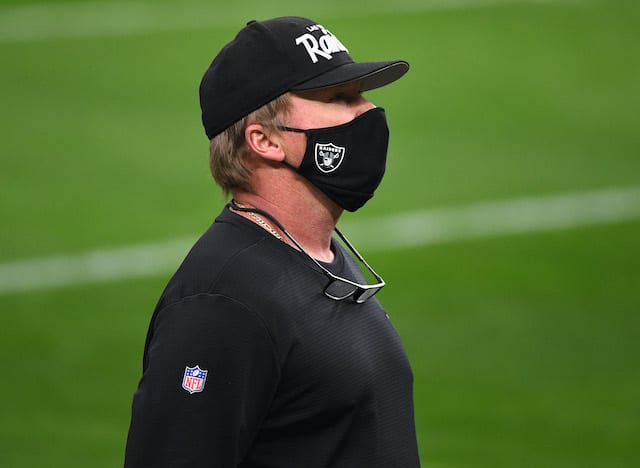 The Las Vegas Raiders’ hopes for the playoffs have firmly slipped away with Thursday’s loss to the Los Angeles Chargers.

There were a number of factors that attributed to the 30-27 loss in overtime. One of the biggest ones that came back to haunt them was head coach Jon Gruden’s decision to kick a field goal in order to secure a 27-24 lead on the Raiders’ opening drive in overtime.

Unfortunately, the Chargers were able to take advantage of the time left on the clock to move downfield for a game-winning drive that was capped by a quarterback sneak into the end zone from Justin Herbert.

Although a win was needed to keep their playoff hopes alive, Gruden feels the field goal was the right call to make on fourth and five from the opponents’ five-yard line, per Josh Dubow of The Associated Press:

Gruden on #Raiders decision to kick FG in OT: “If it was a little bit closer I would have considered going for it. But to take the lead with 3 minutes left, I thought was the play to make at that time.”

Now that hindsight is 20/20, it is safe to say that Gruden would have rather taken a chance at securing a win right then and there instead of settling for a 23- yard field goal from Daniel Carlson. However, his decision is now the subject of plenty of criticism now that the team’s playoff hopes have all but disappeared.

Perhaps even more perplexing is the fact that the Raiders had been flawless on fourth downs after converting on all four attempts versus the Chargers. Instead, Gruden opted to pay it safe and his decision proved to be quite costly.

Although Las Vegas has not been officially eliminated from the playoffs quite yet, they will need plenty of help from other teams in order for it to happen. Otherwise, it will be the second year in a row this team has suffered a major collapse in the second half of the season.