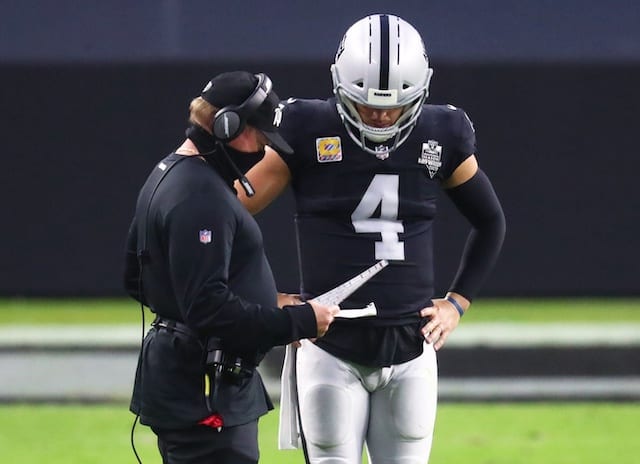 It was puzzling during the offseason when the Las Vegas Raiders were being linked to quarterbacks who were reportedly disgruntled with their own teams because Derek Carr has done nothing but remain steady under center.

Carr may not be the flashiest quarterback in the NFL, but he has served as the organization’s leader through their recent down stretch and appears ready to take another step forward. Las Vegas has a young and talented roster that looks like it can make some waves during the 2021 season, but all of it will start with Carr.

Head coach Jon Gruden is entering his fourth year coaching the Raiders and Carr, and he had high praise for the signal caller’s ability to communicate and prepare every day. “Well, in our system, he’s a great communicator,” Gruden said. “We talk about R.C.E. Recognition, you got to see what the coverage is. You got to see where the blitz is coming from. You got to be a great communicator, and you have to do the preparation.

“You have to know what you’re seeing and what to communicate, and that allows us to have a chance to execute in this system. And when it comes to preparation and recognition and communication, this guy is as good as anybody I’ve been around ever. And I haven’t been around everybody, but I have been around a lot of great ones, and that’s the key, I think to Derek’s success.”

Gruden’s been around some of the league’s best during his illustrious coaching career, so it is apparent that Carr’s made quite the impression. No matter the situation, Carr has remained a positive figure who can rally the locker room, and those traits make him indispensable for the Silver and Black.

Communication and preparation are key to any workplace or industry, but in football, your leaders must do both to get the job done. It will be exciting to watch Carr and the Raiders try to ascend to new heights, starting with their Monday Night Football tilt against the Baltimore Ravens.