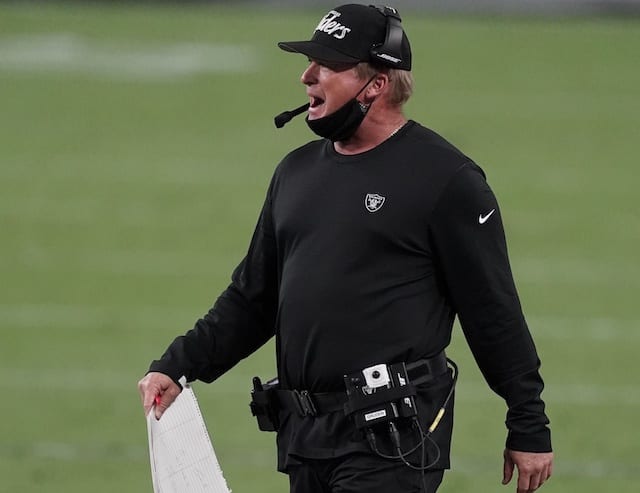 The Las Vegas Raiders failed to capitalize on the extra week off after being dismantled by the Tampa Bay Buccaneers, 45-20, in Week 7.

The Raiders had good reason to be excited coming off the bye following an impressive win over the Kansas City Chiefs. Head coach Jon Gruden had even shared plenty of praise for the pressure that the defensive line generated on Patrick Mahomes during the 40-32 win over Kansas City.

Unfortunately, that was hardly the case against the Bucs as they failed to register a single sack on quarterback Tom Brady. Their fluctuating performance has now resulted in some concern.

Gruden acknowledged the lack of consistency with their pass rush will remain a point of emphasis moving forward, per Vic Tafur of The Athletic:

Gruden said he will address the lack of a pass rush “as soon as this press conference is over … If we’re going to rush four, we have to do a lot better than we did today.”

The drop off from Week 5 to this week certainly warrants some concern for Gruden. After all, the Raiders dialed up three sacks, five quarterback hits on a whopping 32 pressures on Mahomes in Week 5.

However, the pass rush was virtually non existent versus Tampa Bay and it led to disastrous results for Las Vegas. With all day to throw, Brady had a field day completing 33-of-45 passes for 369 yards and four touchdowns.

The Raiders had high hopes for the pair of edge rushers they brought in through the 2019 NFL Draft with Clelin Ferrell and Maxx Crosby. Crosby had emerged as one of the biggest steals as a rookie while Ferrell finally started to show some steady improvement in Year 2.

Unfortunately, the duo is struggling to carry the pass-rushing department after the Raiders registered just seven sacks in their first five games in the 2020 NFL season. Gruden’s comments indicate that if they are unable to generate more consistent pressure with a four-man rush, then the defense will need to get more aggressive with their blitz packages.

Of course, this would also leave them more vulnerable in the passing game, which is already struggling as it is. Regardless, Las Vegas is clearly looking to put an emphasis on making opposing quarterbacks more uncomfortable than they have been.

They recently brought in defensive lineman David Irving, so maybe he can be the spark that the team desperately needs on the defensive side of the ball.