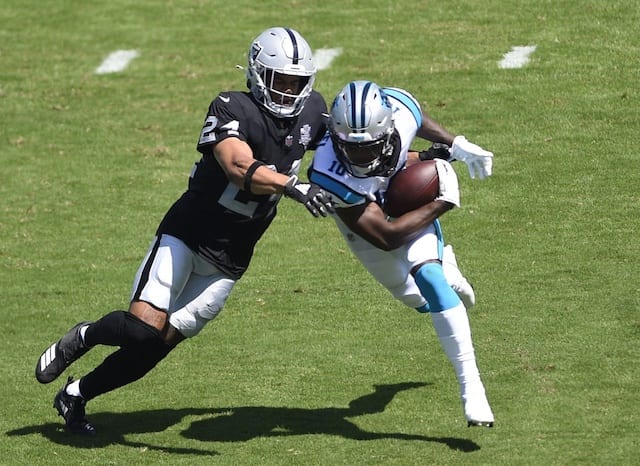 Las Vegas Raiders safety Johnathan Abram enjoyed quite a return to action during the 34-30 win over the Carolina Panthers during Week 1 of the 2020 NFL season.

Abram has been sidelined since last year’s opener when he suffered a torn rotator cuff and labrum that ended his rookie season. The former first-round pick was admittedly anxious to get back in the mix following an unprecedented offseason due to the coronavirus (COVID-19) pandemic.

Not only did Abram make it through Week 1 with a clean bill of health, but he also finished with a game-high 13 tackles while playing an integral role in helping contain running back Christian McCaffrey. Regardless, he seems to be well-aware that this defense is still far from a finished product.

Although Abram was happy to be back, he feels there is still plenty of work to be done on defense, via the team’s official website:

“It felt great to be back out there with my guys,” Abram said. “Today was a very sloppy performance on the defense’s part. We have to go out and execute way more than we did. We gave up a few big plays and if you give up big plays in this league that’s how you get beat. We were fortunate to do enough to come away with a ‘W’ today, but overall we did what we needed to do to get the win.”

Head coach Jon Gruden acknowledged some of the rust that accumulated during the offseason and is confident that Abram can serve as a stabilizing factor:

“These guys missed the offseason program,” Gruden said about Abram and others following the win. “They missed a lot of work last year, he’s out there with live bullets against McCaffrey and a Teddy Bridgewater, and a pretty offensive team, but we have to play better on defense and John’s a big part of that, and we expect him to make sure that happens.”

There was certainly no shortage of firepower on Carolina’s offense between McCaffrey along with wide receivers DJ Moore and Robby Anderson. Regardless, Las Vegas made efforts to ensure that their defense would be well-equipped for such a challenge and will need to put it together if they hope to give a team like the Kansas City Chiefs a run for their money in the AFC West.

Gruden’s comments indicate that the onus will fall on Abram to have a major impact in both the run game and passing game. Fortunately, he has proven that there is good reason to be confident in his skill set so far.

Things will not get any easier for the Raiders as they prepare to host a high-powered New Orleans Saints offense in their first game at Allegiant Stadium this Monday night.

The post Raiders News: Johnathan Abram Happy To Be Back After Missing Almost All Of Rookie Season appeared first on Raiders Newswire.