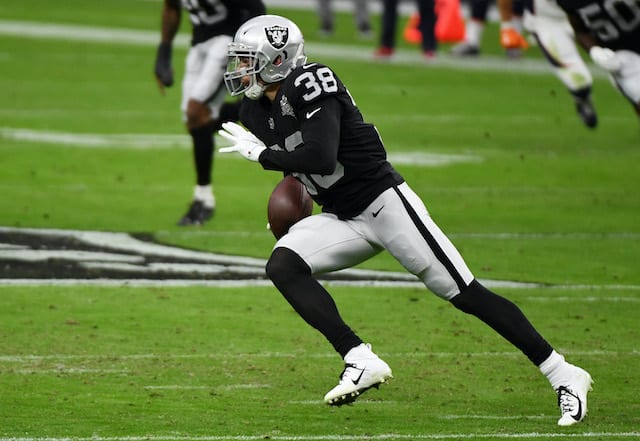 The Las Vegas Raiders are quickly becoming one of the more exciting teams to watch during the 2020 season. That was especially true during their 37-12 victory over the Denver Broncos in Week 10, improving their record to 6-3 and further establishing themselves as a legitimate playoff team.

Heading into the season, the offense was being talked about as potentially one of the more exciting ones after the team added several threats via free agency and the 2020 NFL Draft. Henry Ruggs III was the first receiver taken off the board and has displayed his blazing speed on occasion, while Josh Jacobs has flourished in his second year behind one of the best offensive lines in the league.

Defensively, the Raiders are young across the board but against the Broncos they appeared confident and had themselves an absolute day terrorizing Drew Lock. Lock threw four interceptions and the defense forced and recovered a fumble in the third quarter that completely took Denver out of the game.

Jeff Heath was one of the stars on defense and according to Levi Edwards of Raiders.com, he credited the coaching staff for their work prior to the game:

“I got to give great credit to the coaches for having us prepared,” said Jeff Heath. “We had a lot of good tips this game and I just saw the formation… great job of coaches just letting us know what was coming and just being able to capitalize on that play.”

Jon Gruden was also complimentary of the safety, noting he still has room to get better:

“Jeff Heath has made some big plays,” said Coach Gruden. “He’s not playing 100 percent, but he’s getting close to it. I think he got the fire started.”

The Raiders signed the veteran to a two-year, $8 million contract this past offseason and so far he has delivered. Against Denver, Heath came down with two of the four interceptions while also doing a great job in coverage.

Las Vegas has turned things around in recent weeks and has continued to show why there is reason to be optimistic about the long-term outlook. However, the defense gets a much tougher task in Week 11 when they take on the Kansas City Chiefs in a big division matchup.