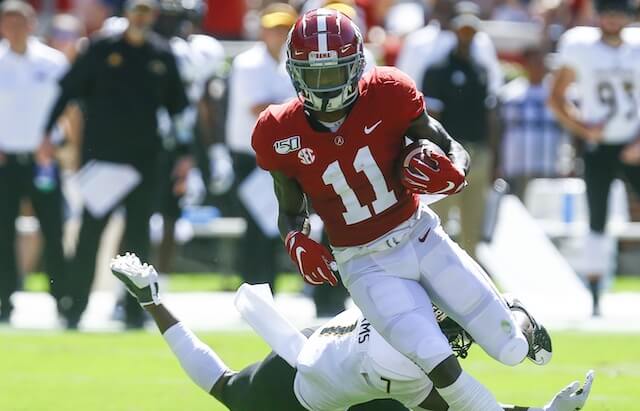 One attribute the Las Vegas Raiders have valued in wide receivers over the years is speed, so it came as no surprise when they took Henry Ruggs III out of Alabama with the 12th pick in the 2020 NFL Draft.

Ruggs ran a 4.27 40-yard dash at the NFL Scouting Combine, which was the fastest mark out of this year’s draft class.

The Raiders really struggled at the wide receiver position in 2019 after they cut Antonio Brown and Tyrell Williams was hampered by injuries. Because of that, it was no secret that they were taking a receiver with one of their two first-round picks in what was believed to be one of the best receiver draft classes ever.

They had their pick of the litter at 12 and instead of going with some of the other receivers that were believed to be more complete like Jerry Jeudy and CeeDee Lamb, they took a flier on the fastest of the bunch hoping that he will be able to add another dimension to their offense.

With the 2020 NFL season just around the corner, EA Sports is set to release its annual Madden 21 game this upcoming week. According to Field Yates of ESPN, Ruggs’ speed rating for the start of his rookie season has been revealed:

Only one player (Tyreek Hill, 99) had a faster speed rating in last year’s game.

Ruggs is held in the same regard as Tyreek Hill and some of the other fastest receivers in the league, so it is not surprising to see EA Sports give him a 98 speed rating even though he hasn’t played a single down in the NFL.

The one aspect the Raiders offense was lacking in 2019 was a vertical threat, so the hope is that Ruggs will give them that while also opening up the offense for the team’s other stars like Josh Jacobs and Darren Waller.