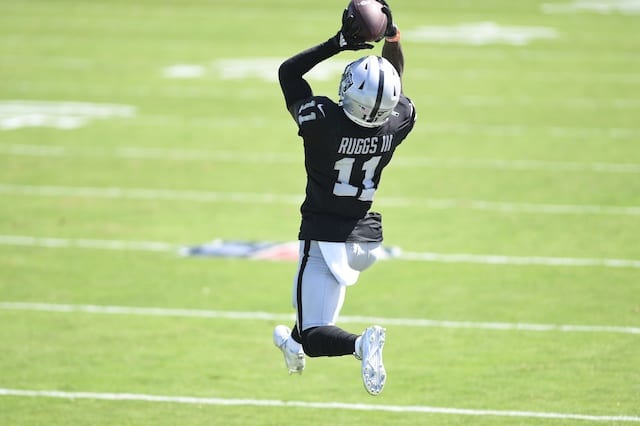 The Las Vegas Raiders are gearing up for their first matchup against an AFC West rival, the Denver Broncos in Week 10. While already a big game due to the tightness of the playoff race, this game will specifically be fun for Raiders first-round wide receiver, Henry Ruggs III. The Raiders selected Ruggs with the 12th overall pick, and three picks later, the Broncos selected Ruggs’ Alabama Crimson Tide teammate Jerry Jeudy.

Jeudy and Ruggs — along with CeeDee Lamb — were considered the best of what looks to become a historically great wide receiver draft class. The two Crimson Tide wideouts simply dominated in college, averaging over 15 yards per catch and combining for 18 touchdowns in 2019.

Ahead of the matchup, Ruggs said he was excited to play against his former teammate, even if getting the win against a divisional opponent remains the most important things, according to Mark Inabinett of AL.com:

“It’s a division game, so we got to focus on getting a win,” Ruggs said, “but it’s always exciting to play against guys that you know, especially against guys you played alongside with, so it’ll be an exciting game. But, of course, we want to come out and do what we got to do to get our win.”

Raiders head coach Jon Gruden spoke about the team’s mindset on draft day when they drafted Ruggs, praising the entirety of the 2020 wide receiver class:

“We loved all those receivers. We really did,” Raiders coach Jon Gruden said on Wednesday. “CeeDee Lamb, Jeudy – there’s about 10 of them. We tried to get seven or eight of them selected this year, but we could only get a few of them.”

Jeudy and Ruggs will be facing off twice a year for the foreseeable future, a great opportunity for both receivers to showcase their growth in the NFL.

So far, both receivers have shown legitimate star potential while also struggling with consistency.Jeudy is coming off of a career game with seven catches for 125 yards and a touchdown against the Atlanta Falcons. It was his first game over 75 yards receiving and with more than five receptions.

Ruggs’ best game came in the upset win over the Kansas City Chiefs, where he caught two passes for 118 yards and a touchdown. Ruggs is yet to have a five-catch game.