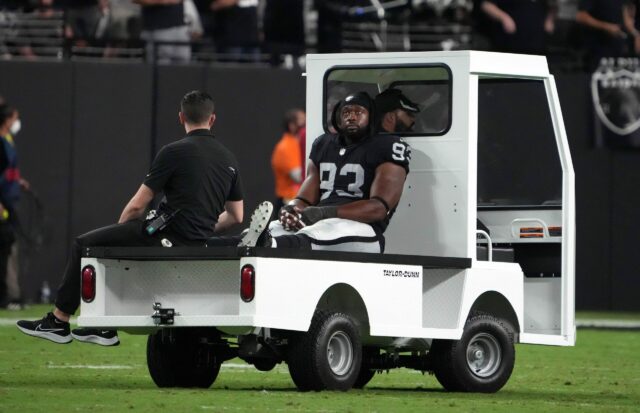 Although the Las Vegas Raiders managed to win their 2021 NFL season opener at Allegiant Stadium in spectacular fashion, they could not make it out unscathed after suffering key injuries on both sides of the ball.

Among the most notable was defensive tackle Gerald McCoy, who was carted off the field during the thrilling 33-27 overtime win versus the Baltimore Ravens. Head coach Jon Gruden provided an ominous update that the injuries suffered on the night may be long-term.

It appears his worst fears have been confirmed. According to NFL Network’s Ian Rapoport, McCoy is expected to miss the rest of the season with a knee injury:

#Raiders DT Gerald McCoy suffered a season-ending injury on Monday night, sources say. Another season cut short for the former multi-year Pro Bowler. The team announced it as a knee on MNF. Damion Square has replaced him on the roster.

The injury deals a crucial blow to the Raiders’ defensive front after they had made efforts to improve this group during the offseason. He was even listed as a starter at defensive tackle alongside fellow new additions like Solomon Thomas and Quinton Jefferson.

Unfortunately, McCoy played just nine snaps against the Ravens before he was forced out of the game. Las Vegas is now expected to replace his spot on the 53-man roster with Damion Square after signing him off waivers from the Los Angeles Chargers practice squad.

It remains to be seen what this could mean for McCoy’s career since this is the second year in a row he was forced to miss an entire year due to injury. He was sidelined during the 2020 campaign after suffering a ruptured quadriceps in training camp with the Dallas Cowboys.

Aside from McCoy, guard Denzelle Good is also slated to miss the rest of the season with a torn ACL. Meanwhile, guard Richie Incognito, quarterback Marcus Mariota, and defensive end Yannick Ngakoue all remain on the mend with injuries of their own.

Despite coming off a tremendous win, the Raiders may need to figure out how to make it through these next few weeks with a shorthanded roster.