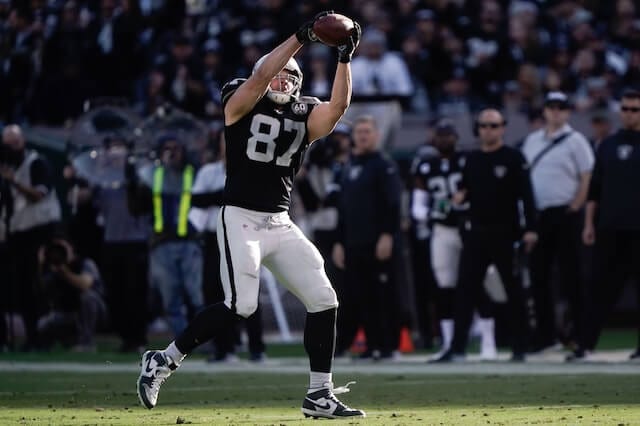 It has been an eventful offseason for the Las Vegas Raiders thanks to the notable roster additions and relocation during the coronavirus (COVID-19) pandemic.

There is no question that all the restrictions placed in response to the ongoing pandemic have presented its own set of challenges for the players trying to get acquainted with their new teams leading up to the 2020 NFL season. This is especially true for the Raiders since they will be relying heavily on their crop of young talent to help usher in a new era at Allegiant Stadium.

Although such an unprecedented offseason was supposed to come with its fair share of negative side effects, this does not seem to be the case for Las Vegas in training camp so far.

According to Vic Tafur of The Athletic, tight end Foster Moreau is impressed with how quickly this year’s rookies have taken in the offense:

“I think we’ve really made great jumps, great leaps,” Moreau said Monday. “Just done an exceptional job, especially at the rookie level. And kind of getting everyone acclimated to the speed at which we expect guys to learn.

Moreau added that them being on the same page has helped speed things up at practice:

“It’s kind of a difficult offense to wrap your head around, a lot of verbiage, but I think guys have done a really good job picking up on things and we are flying around the field.”

Moreau is all too familiar with the challenges of learning head coach Jon Gruden’s offense following his arrival as a fourth-round pick in the 2019 NFL Draft. It seems the circumstances of the offseason have forced this year’s rookies to get acclimated much more quickly than his class did.

This should certainly pay huge dividends for the offense heading into the 2020 campaign. While the Raiders may have generated some hype with their newfound firepower in the receiving corps, the time has come for them to put it all together, especially now that wide receiver Tyrell Williams is set to potentially miss some time with a torn labrum in his shoulder.

Moreau will be looking to build on his role as a bonafide red zone option for quarterback Derek Carr after hauling in 21 receptions for 174 yards and five touchdowns as a rookie last season. He will certainly have his work cut out competing in a crowded tight end room alongside Darren Waller and Jason Witten.