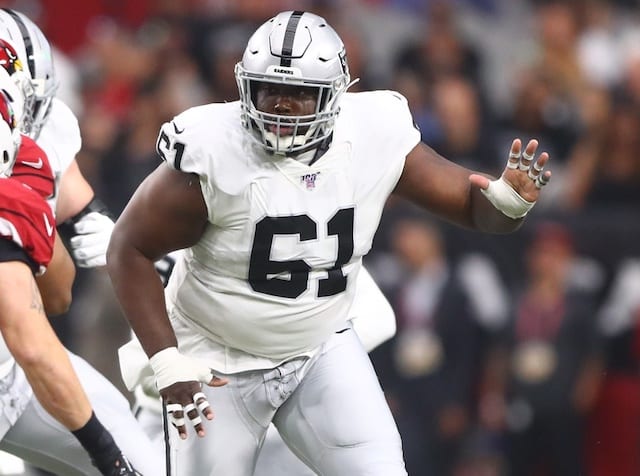 Going into the 2020 NFL season, there is a lot of optimism in the Las Vegas Raiders organization after adding a number of talented players this offseason.

The Raiders are coming off a 7-9 season in which they missed the postseason, although with the offseason additions and players they are returning, the expectation is they will return to the playoffs for the first time since 2016 this year.

A big reason for the Raiders’ success could be their offensive line, which was recently recognized as one of the best in football by Pro Football Focus.

Perhaps the best player on that offensive line is center Rodney Hudson, who has been the Raiders’ anchor for several years now. Raiders tight end Foster Moreau recently showed some love to Hudson, pointing him out as one of the players on the team with the most talent and skill that doesn’t get enough hype:

Hudson agreed to a contract extension before the start of the last season that made him the highest-paid center in the league, and deservingly so as he has been a stable factor for the Raiders’ offensive line, being named to the Pro Bowl three of the last four years.

The deal will keep him in the organization through 2022 though, which is great news considering he continues to be one of the best centers in the league:

Not only Hudson, but the Raiders’ offensive line as a whole deserves more hype going into the 2020 season. A starting unit of Kolton Miller, Richie Incognito, Hudson, Gabe Jackson and Trent Brown is arguably the best in the league, now it will just be up to them to go out and prove it this season.