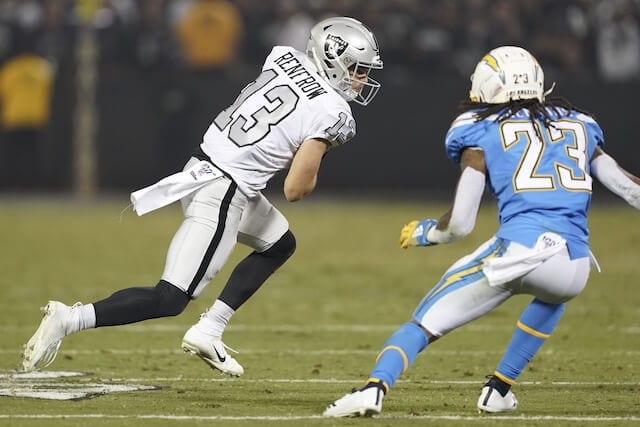 As the NFL season begins inching closer, fans across the country are beginning to do their research for their fantasy leagues.

The Las Vegas Raiders haven’t had many fantasy-relevant players in recent years, although that is expected to change in 2020. The Raiders already had one of the best running backs in Josh Jacobs and tight ends in Darren Waller to go along with a superb offensive line.

They made it a focus to bring in even more weapons this offseason, drafting Henry Ruggs III, Lynn Bowden Jr. and Bryan Edwards while also signing Nelson Agholor and Jason Witten.

That should help open up the offense for Derek Carr even more in 2020, leading to more yards, points and fantasy points for his weapons. One player to keep an eye on in that respect is slot receiver Hunter Renfrow, who closed his rookie season strong.

Renfrow is expected to see his role expanded even more in his second season, and because of that, ESPN’s Eric Karabell has him as one of his fantasy sleepers to watch for:

It took awhile for the Raiders to rely on him, but Renfrow started breaking out midway through his rookie campaign, and closed strongly with a pair of 100-yard receiving games, each featuring a touchdown catch. Those playing in PPR formats need to be aware of an emerging slot option that gets the job done with quickness and route-running over blinding speed. A 75-catch, 1,000-yard season is hardly out of the question, and hardly matches up with his draft-day value.

There are a lot of mouths to feed in Las Vegas, but Carr has also had an eye on his slot receivers, so Renfrow could be the biggest beneficiary in the Raiders offense in 2020.

Not known for his size or speed, Renfrow has been able to get open and produce at every level. He played in 13 games in 2019, hauling in 49 receptions for 605 yards and four touchdowns.

If he can build off that in 2020, then the Raiders could very well have one of the best young groups of pass-catchers in the league.