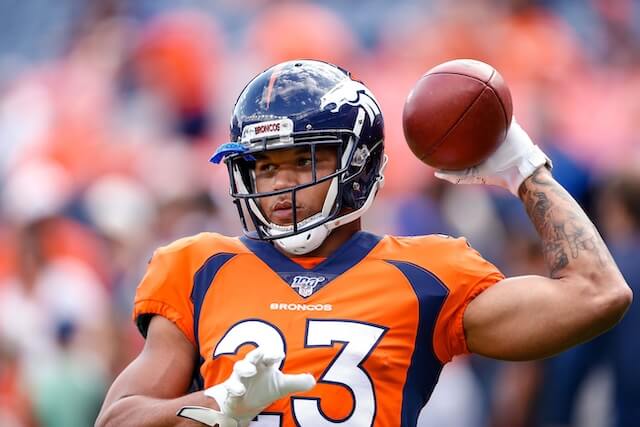 Although he may have been considered a long shot to make the team, Las Vegas Raiders running back Devontae Booker managed to earn a spot on the final 53-man roster heading into the 2020 NFL season.

The Raiders made sure to secure some quality depth in the backfield this offseason to complement Josh Jacobs. While running back Jalen Richard is slated to resume his role as the change-of-pace option, running backs Theo Riddick and third-round pick Lynn Bowden Jr. were also competing for reps in training camp.

Las Vegas has since opted to release Riddick and trade Bowden to the Miami Dolphins in the weeks leading up to the regular season. This opened the door for Booker to grab that last spot on the depth chart.

Despite the unprecedented offseason due to the coronavirus (COVIF-19) pandemic, Booker is proud of the strides he made and is looking forward to doing his part to help the team, via Levi Edwards of the team’s official website:

“Just me coming here and working my butt off and us really not having a full offseason with the team and everything, it says a lot about just my work ethic,” said Booker. “My expectations for the team is just to get better each day and go out there and just compete and have fun.”

Booker admits that he will not be holding back when the time comes to square off against the AFC West rival Denver Broncos, his former team:

Booker’s career got off to a promising start after he was taken by Denver in the fourth round of the 2016 NFL Draft and subsequently led the team in rushing as a rookie. Unfortunately, he spent the following years competing for snaps in their backfield committee before ultimately falling down in the pecking order to a non-existent role.

It appears the change of scenery helped pay some dividends for Booker with a fresh start in Las Vegas. While he may be slotted behind the workhorse Jacobs and the versatile Richard, it is clear that he managed to make quite an impression on the coaching staff despite a challenging offseason.

Booker will have a chance to stick it to his former Broncos two times this season in a battle for AFC West supremacy. For now, he is focused on helping the Raiders where he can.