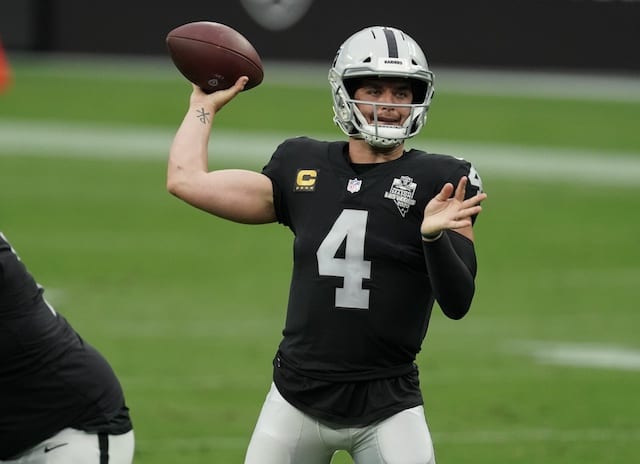 Although the Las Vegas Raiders came up short against the Buffalo Bills in Week 4, quarterback Derek Carr managed to make franchise history by becoming the team’s all-time leader in passing touchdowns.

Carr delivered a dime to wide receiver Nelson Agholor late in the fourth quarter for his 151st career touchdown pass. With it, he successfully passed the mark left by Hall of Famer Ken Stabler.

The record certainly carries extra weight for Carr since he credits his father’s fandom of Stabler for ingraining him into the Silver and Black as a kid. Despite having already closed in on the historic mark heading into Week 4, he admits it barely hit him that he was in such elite company, via Kyle Martin of the team’s website:

“The first time I thought about it in a long time was driving to the facility yesterday,” Carr said. “I took a moment and just thought about the Snake and his greatness. He’s the best, man.”

Carr shared more praise for Stabler’s family and regrets not being able to meet the man himself:

“I tip my hat to [Stabler’s] family,” Carr said. “They’ve been so gracious to me. So loving to me. I wish I could’ve met [Stabler], talked to him, learn from him. I didn’t have that opportunity obviously.”

Carr added that while the historic feats are nice, being able to secure the win would be the cherry on top:

“If we could’ve won, then it feels better,” Carr said. “I’m sick of losing. I’m sick of working as hard as I do and as we do, and going out there and losing. It sucks. Enough is enough. I think that’s my message: I’m excited for [the record]— I dreamed of it when I got drafted here. I looked all those stats up and was like, ‘Man, I want to break all of these as a competitor.’ But I’m sick of losing; enough’s enough. I’m tired of it.”

Carr has maintained his approach of letting his play do the talking in the 2020 NFL season and it is paying some dividends under center so far after throwing for over 1,000 yards, eight touchdowns with zero interceptions through the first four games. Unfortunately, Las Vegas has failed to make a statement after losing back-to-back games against formidable opponents.

While putting up solid numbers during a loss may not mean much to Carr, he certainly has good reason to relish in this one until preparation for Week 5 begins.