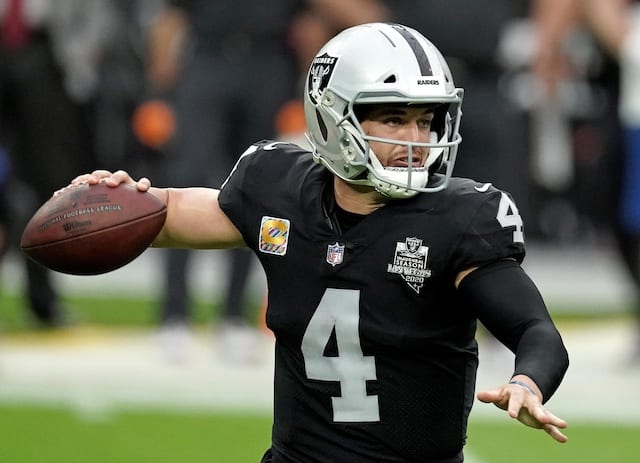 Las Vegas Raiders quarterback Derek Carr was not listed on the team’s injury report on Thursday so will be good to go for Saturday’s Week 16 matchup against the Miami Dolphins at Allegiant Stadium.

Carr was forced to leave last week’s game against the Los Angeles Chargers early after suffering a groin injury trying to run the ball into the end zone.

Raiders backup quarterback Marcus Mariota did an admirable job filling in for Carr to finish out that game, although it was in a losing effort as the Chargers went on to earn the overtime victory.

While Carr is as tough as they come, Raiders head coach Jon Gruden was not sure if the injury would force him to miss any time. It seems that the injury progressed positively throughout the week though considering he is not even on the injury report altogether.

The loss to the Chargers essentially eliminated the Raiders from postseason contention, although they still have about a 1% chance of getting in. For that to happen, they will need to beat the Dolphins this weekend and the Denver Broncos in Week 17 while also getting some help from other teams around the league.

So even though the odds are small, getting Carr back is essential if Las Vegas wants any hope of staying in the playoff race. Carr is in the midst of one of the best seasons of his career, completing 68.1% of his passes for 3,396 yards, 24 touchdowns and seven interceptions.

If he is unable to make it through the game against the Dolphins, then Mariota will be ready to back him up once again.

As far as other injuries on the Raiders goes, defensive end Clelin Ferrell will miss the game due to a shoulder issue while defensive tackle Maurice Hurst is questionable with a calf injury.

The post Raiders News: Derek Carr Not Listed On Injury Report, Good To Go For Game Against Dolphins appeared first on Raiders Newswire.