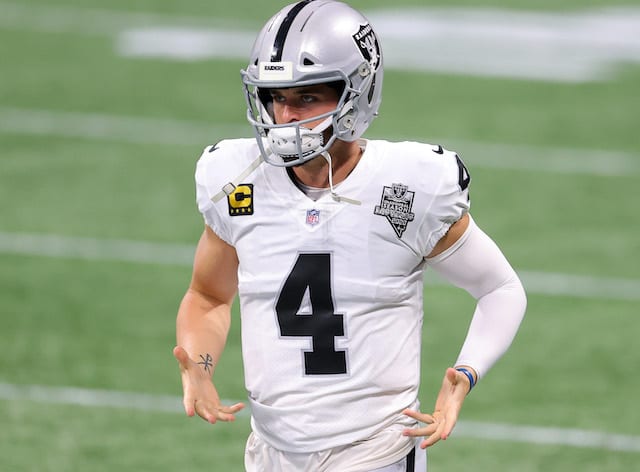 The Las Vegas Raiders have chosen quarterback Derek Carr as their nominee for the Art Rooney Sportsmanship Award.

Carr is in the midst of a career year having thrown for 2,646 yards, 19 touchdowns, and just four interceptions heading into the final stretch of the 2020 NFL season. Not only that, he firmly etched out a place for himself as the franchise’s all-time leader in passing touchdowns by surpassing Hall of Famer Ken Stabler.

The award is given annually to a player that displays outstanding sportsmanship on the field. It was created in 2014 to honor the late founding owner of the Pittsburgh Steelers Art Rooney Sr.

Carr has now been nominated for the fifth consecutive year thanks to his approach both on and off the field. He is now looking to join future Hall of Famer Charles Woodson as the second Raider to take home the honor after the former won it in 2015.

A panel of former players from the NFL Legends Community – Warrick Dunn, Pro Football Hall of Famer Curtis Martin, Karl Mecklenburg and Leonard Wheeler – will select eight finalists for the award. The winner will then be determined by current players when they fill out their Pro Bowl ballots on Dec. 18.

Carr has gone up against some pretty stiff competition since being nominated in Woodson’s stead including running back Adrian Peterson and quarterback Drew Brees. Before that, it was linebacker Luke Kuechly and running back Frank Gore that took it home.

The Raiders have battled through a difficult year due to injuries and setbacks with the coronavirus (COVID-19) pandemic. Fortunately, Carr has been a major stabilizing factor for this team ever since they were in the midst of some significant changes during the offseason with the relocation. Despite coming into the year with a chip on his shoulder, it appears his efforts in sportsmanship on the field have not waned.