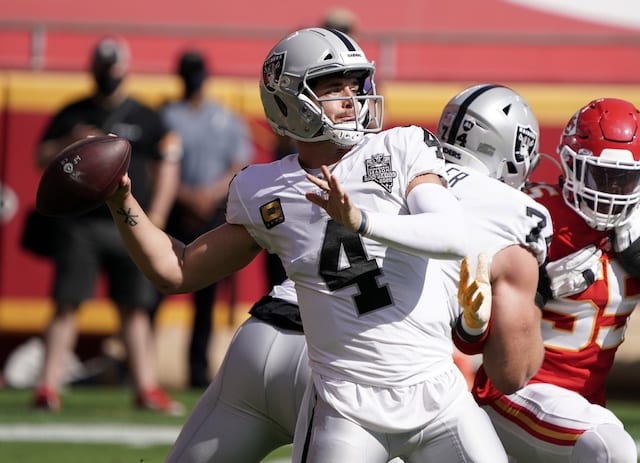 The Las Vegas Raiders (3-2) made quite a statement with their 40-32 victory over the Kansas City Chiefs in Week 5. Perhaps even more impressive is the spectacular fashion in which quarterback Derek Carr helped them do it in.

Carr knew full well that the Raiders’ offense would need to step up their game if they were going to keep up with this star-studded Chiefs’ offense led by quarterback Patrick Mahomes. Fortunately, he managed to oblige with one of his best performances of the 2020 NFL season.

Carr was able to outduel Mahomes by completing 22-of-31 passes for 347 yards, three touchdowns, and an interception. Meanwhile, running back Josh Jacobs was able to grind out 77 yards and two touchdowns on 23 carries.

It is no secret that the Raiders have struggled to put up much of a fight against the reigning Super Bowl champs in recent years. Carr admits it was nice to finally leave Arrowhead Stadium with a win for the first time in his career, per Kyle Martin of the team’s official website:

“I’ve taken a lot of sad walks up that ramp, but not today,” Carr said with a smile following the game. “I’m going to enjoy this one.”

Carr added that the Raiders must find a way to beat the Chiefs on a more consistent basis if they hope to make this a rivalry in the AFC West:

“To have the knowledge as a quarterback to know that you have a guy who runs 4.1 or 4.2 and the knowledge that, not only that, but he knows which route to run, and he knows if we get the look we want to get, he can win, having that confidence it doesn’t matter what’s going on with anything else,” Carr explained. “As long as I sit there and make my read we have a chance to make that play. As it unfolds and you throw the ball it’s like, ‘I like this.’”

Although Ruggs had been sidelined the past two games with hamstring and knee issues, he broke out for 118 yards and a touchdown on a mere two receptions. His numbers versus Kansas City show the type of impact he can have on a game with his skill set as a deep threat in the passing game for Carr and is precisely why Las Vegas opted to make him the first wideout taken in the 2020 NFL Draft.

Things will not get any easier for Carr and Co. as they get set to host the Tampa Bay Buccaneers on. Sunday Night Football in Week 7 after a bye this week.