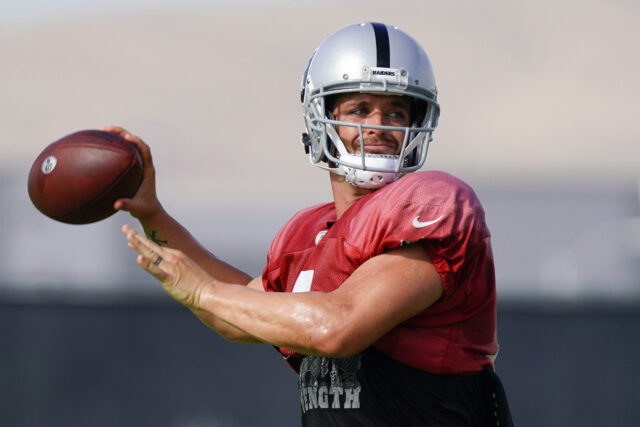 There is a different level of excitement surrounding the Las Vegas Raiders heading into the 2022 NFL season. After making their first playoff appearance since 2016, the Raiders added a new head coach in Josh McDaniels, as well as made some big additions to their roster headlined by the trade for star wide receiver Davante Adams, reuniting him with his college quarterback Derek Carr.

It can be argued that the Raiders have the best collection of skill players in the NFL and could potentially have the best offense in the league. Adams and Hunter Renfrow are an excellent receiving duo, and combining them with tight end Darren Waller gives the Raiders an elite group of pass catchers for Carr to throw to. And running back Josh Jacobs is no slouch out of the backfield either.

With so many weapons at his disposal, there is a belief that the Raiders’ offense to be genuinely explosive and take more shots downfield. When asked about this, Carr is willing and able but believes it will be about what the system calls for:

“Yeah. I got to be honest, I thought the last couple years we’ve done that,” Carr said. “In this system, I don’t know. I haven’t played games in this system yet, seen that flow of how he calls them, where he wants the ball to go. You’d have to go look back to his past. I know I’m willing. I know we’re able. We’ll see, but right now we are just working a lot of speed-option, triple-option type things. (laughter)”

Carr and the rest of the Raiders are working on mastering this new offensive system under McDaniels. Though neither Adams nor Renfrow is known as being deep threats, each has shown the ability to break out for big plays, and it might be Waller from the tight end position who is the team’s best big-play receiver.

Whether or not the Raiders are taking a bunch of shots downfield, the offense has the pieces to dominate with a coach who has repeatedly shown him that he can create a top-tier offense with different weapons. There is no doubt that the Raiders will be a team to watch once the season begins.