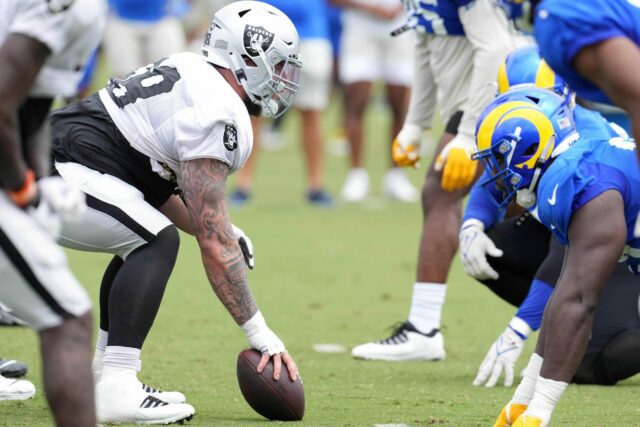 The Las Vegas Raiders are just days away from making their 2021 season debut at Allegiant Stadium for Monday Night Football against the Baltimore Ravens.

Even though the Ravens have endured several injuries the past week, they will be a formidable opponent though the Raiders might be able to hang given all the talk out of training camp. One thing that may determine the game’s outcome is how well Las Vegas’s new offensive line holds up against Baltimore.

The Raiders opted to trade away several of last year’s starters and replaced them with players like Andre James, who do not have much NFL experience. James is set to take over at center, replacing Rodney Hudson, who is widely considered one of the best centers in the league. However, Derek Carr has taken a liking to James and discussed their dynamic. “The relationship I have with Andre has been great,” Carr said.

“Really since he came in as a free agent, I’ve had a great relationship with him and love that guy. Fun to be around, super smart and works his tail off. And not playing with Rodney [Hudson], it will be weird but that’s the NFL. Things change all the time. I’ve had a lot of people in the locker room next to me in my eight years, so having a new center will definitely be weird, but it’s just something that you got to do.”

James is entering his third season and has flashed a few times in the past for the Raiders as he has had to come in whenever injuries hit. Several players, including Carr, have expressed their confidence in James as the starting center, and the quarterbacks’ recent comments only speak to high the organization is on him.

However, even though James is receiving praise now, he will still have to go out and prove that he was worth the investment. The Ravens offer a difficult test off the bat, so it will be worth watching how well the young lineman responds.