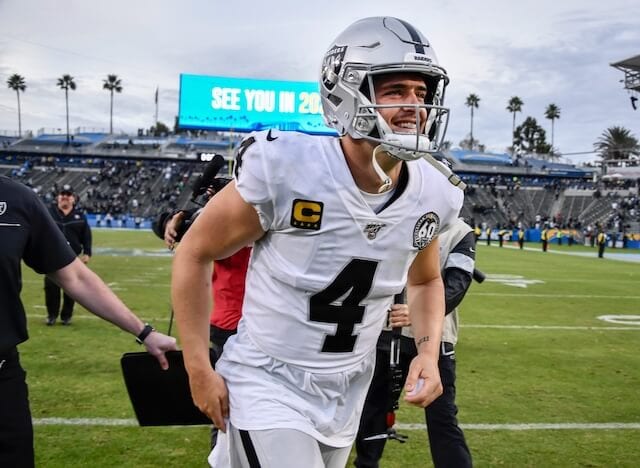 Derek Carr is undoubtedly the face of the Las Vegas Raiders and the quarterback is looking to bring the team back to glory after several down years in the Bay Area.

The Raiders are a team of intrigue heading into the 2020 NFL season as they will be relocating to Nevada with a revamped roster full of young talent on both sides of the ball. Meanwhile, it will be Carr’s third year under Jon Gruden and he will have more weapons available to him in the offense.

It is an exciting time for Las Vegas finally getting their own football team and stadium and according to Kyle Martin of Raiders.com, Carr is ecstatic about his new playing home:

It was recently announced that Allegiant Stadium will play host to the Pro Bowl in 2021, giving the best players from every team an opportunity to see the Raiders’ new home up close.

While Carr is impressed with Allegiant Stadium and excited for the potential to play in the Pro Bowl there, he still has his eyes on the main goal:

“Hopefully it’s a thing every year, to be honest,” Carr said. “I think [the Pro Bowl] should stay here, but like I’ve talked to you about, I’ve been to three Pro Bowls, it’s blessing, it’s cool, but I’m trying to do some other things.

Unfortunately, Raiders fans may have to wait to see the team play live in their new stadium due to the ongoing coronavirus (COVID-19) pandemic, but will still get a chance to see them on television when they open up the stadium against the New Orleans Saints on Monday Night Football in Week 2.

As for Carr’s Super Bowl aspirations, it will be a steep climb given the talent of the rest of the league and the youth of the current squad. A playoff spot is not out of the question, though, and it will be interesting to see how far Carr can lead this iteration of the Raiders in 2020.