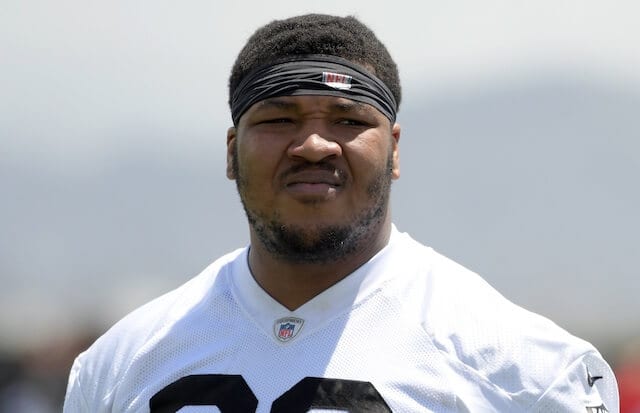 The Las Vegas Raiders announced that offensive lineman Denzelle Good is their 2019 recipient of the Ed Block Courage Award. Good was awarded this honor due to his play and professionalism following the death of his brother.

The Ed Block Courage Award was initially started by the Eastside Athletic Club of Maryland. The club had been working on fundraising for abused children and wanted to center events around their then professional football team, the Baltimore Colts. Handing out the award to NFL players developed due to the involvement of the Colts and the award was named after World War II veteran and longtime Colts athletic trainer, Ed Block.

Since then, it has been handed out to one member of each NFL team every year. The award is even more special since each team’s players vote on who should receive it.

Good’s brother was murdered in October of 2018. After a number of injuries during his 2018 season, Good was cut by the Colts and signed with the Raiders. Since then, he has helped the Raiders offensive line become one of the best in the league.

Last season he appeared in all 16 games but played just five on the offensive line. Of course, he along with his teammates proved to be invaluable for the Raiders and their newest star running back Josh Jacobs.

Thanks to the offensive line, Jacobs was able to capitalize on his talents and record one of the greatest rookie seasons for a Raiders running back in history. He shattered a number of Raiders’ records and finished with the 37th most rushing yards by a rookie in NFL history.

For Good, his future with the Raiders is currently secured after signing another one-year deal in January of this year. Hopefully he can continue to show courage and talent as the Raiders search for a winning season in 2020.