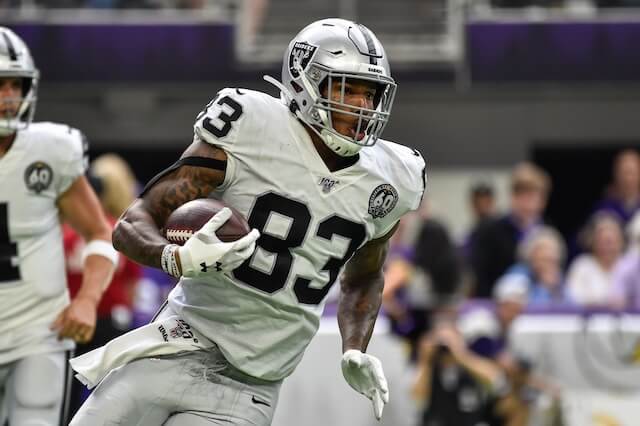 The Pro Football Writers of America (PFWA) recently released their 2020 Off-Field Award nominees, and Las Vegas Raiders tight end Darren Waller was nominated for the George Halas Award, which is give to the NFL player, coach or staff member who overcomes the most adversity to succeed.

Waller hasn’t been shy about everything he’s been through in his life, most notably overcoming addiction to become a star tight end for the Raiders. His story simply was too much to pass up for the PFWA when coming up with worthy candidates for the George Halas Award:

Waller once had such a strong addiction to drugs that he says he wouldn’t have been surprised if he failed 100 NFL drug tests. Twice suspended for violations of the league substance abuse policy, Waller emerged from rehab as a new man. The Raiders signed him from the Ravens’ practice squad in 2018, and he had a breakout season in 2019 with 90 catches for 1,145 receiving yards. Thumb surgery kept him from being named to the Pro Bowl as a replacement for Travis Kelce.

Recent winners of the George Halas Award include Eric Berry of the Kansas City Chiefs in 2016, David Quessenberry of the Houston Texans in 2017, Marquise Goodwin of the San Francisco 49ers in 2018 and Ryan Shazier of the Pittsburgh Steelers in 2019, all of which have incredible stories of their own.

What Waller has gone through to become a star in the NFL cannot be understated enough, so it is good to see he is getting the recognition he deserves after a career season in 2019.

The 2020 Off-Field Awards balloting is underway through June 19, with the final results announced beginning on June 22.