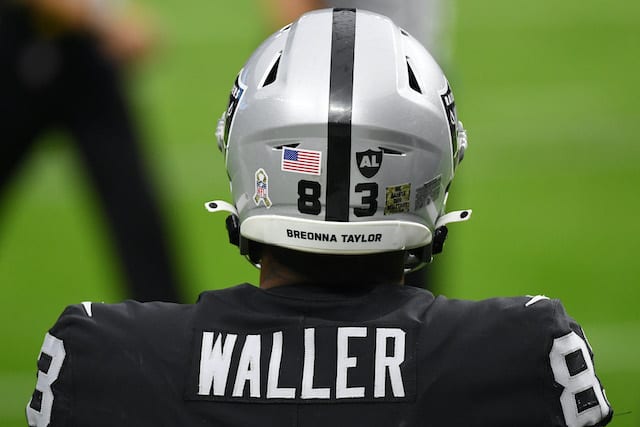 While there has not been much for Las Vegas Raiders head coach Jon Gruden to hang his hat on in recent years, fans are relishing Darren Waller’s emergence as one of the NFL’s best tight ends.

Waller has thrived in his role as the No. 1 option in the Raiders’ passing game with consecutive 1,000-yard campaigns. This included a record-setting 2020 season when he broke the mark set by Hall of Fame wide receiver Tim Brown for the most receptions in a season in franchise history.

It will be difficult for Gruden to find ways to help Waller top these numbers moving forward. But, fortunately, he is confident that the young options around him will start to pay some dividends.

Gruden praised Waller as a talent that transcends his position and is hoping this receiving corps can help clear out some space for him, via Vincent Bonsignore of the Las Vegas Review-Journal:

RJ: As it relates to the offense, Henry Ruggs and Bryan Edwards are a couple of young receivers that need to take steps forward. How have they looked?

JG: Ruggs and Edwards are still young guys. It’s the first time they’ve had a full training camp, a full offseason program. People have to realize the best receiver on this team is a super freak named Darren Waller. And he’s not a tight end. He’s catching passes at X, where Edwards plays. He’s catching passes at Z, where Ruggs plays.
With Henry, you have to remember the name Cliff Branch. Pro Football Focus wasn’t around then to say he only had 50 catches. But he ripped the stinkin’ deep end of the coverage off. And it was better for Dave Casper and Fred Biletnikoff.

Part of the reason Waller has explosive plays is because of Ruggs. He’s a threat with or without the ball. And I believe Bryan has a chance to be a special player. He’s got to stay healthy. And I don’t want to discount Hunter Renfrow or Zay Jones or Willie Snead. We’re going to use them all.

There is plenty of accuracy to Gruden’s comments regarding both his talent and position. Although he may be listed as a tight end, he is the go-to option for quarterback Derek Carr in the passing game, and that likely will not change any time soon.

Regardless, the Raiders have emphasized revamping their receiving corps in recent years and are still waiting for it to pay some dividends. Ruggs was the first receiver off the board in his draft class, so he will need to prove he can be more than a downfield decoy.

As for the other members of this group, the rest of the packing order behind Waller still has yet to be established. Therefore, they would be wise to take advantage of the opportunity for an increased role in the offense.