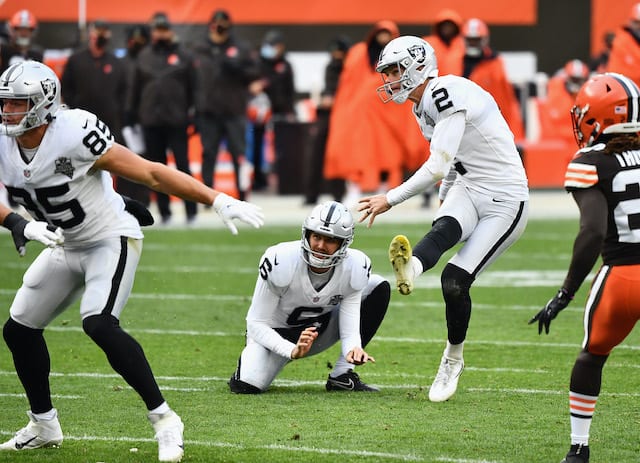 The Las Vegas Raiders earned themselves a solid win in Week 8 after defeating the Cleveland Browns, 16-6, to improve to 4-3 on the season.

The victory was hard-fought for the Raiders but not because of the Browns. Rather, the weather played a significant role in how the two teams played as strong winds prevented many deep passing plays.

Josh Jacobs was a star for Las Vegas, carrying the ball a season-high 31 times for 128 rushing yards while Derek Carr was limited to 112 passing yards and one touchdown. The numbers were similar for Cleveland as Baker Mayfield only threw for 122 yards while Kareem Hunt accounted for 66 of their team’s 101 rushing yards.

The kicking game was arguably impacted the most and Daniel Carlson recounted what it was like to kick in those conditions, via Kyle Martin of Raiders.com:

“Pregame it wasn’t quite as windy, so I had a really good pregame trying to figure it out,” Carlson told reporters after the game. “Then we got out there and I really aimed at that right upright and that was by far the windiest game I’ve ever played in, and most of this team has probably played in. So, I just aimed it at the right upright and hit basically an A-plus ball, exactly how I wanted to. I just didn’t factor in the wind quite enough.”

However, Carlson gave credit to his long snapper and holder for giving him opportunities to convert on his kicks:

“That snap and hold is tough when it’s cold,” he said, “when it’s rainy, when it’s sleeting, whatever it was — those guys did a great job of giving me opportunities to get the ball down and put it through.”

Carlson missed his first field goal of the day, hitting the left upright as the ball curved significantly from where he kicked it. However, he did a good job of adjusting and nailed his three field-goal attempts along with an extra point.

The Auburn product has been one of the most reliable kickers in the NFL this season, and his showing in Cleveland was a testament to his abilities. Carlson and the rest of the Raiders will not have to worry about powerful winds in Week 9 when they play the Los Angeles Chargers.