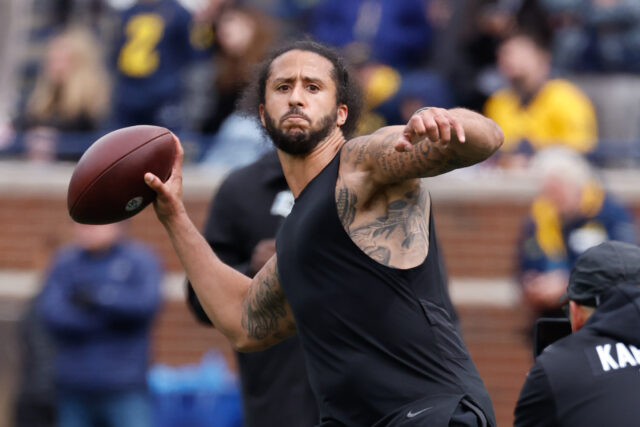 The Las Vegas Raiders roster is in great shape heading into the 2022 season after a successful free agency and draft.

Derek Carr reunites with Fresno State and All-Pro receiver Davante Adams, while new defensive coordinator Patrick Graham gets Chandler Jones to bring pressure off the edge. The Raiders have a potent team on both sides of the paper and look like a legitimate Super Bowl contender.

At this point of the offseason, teams will be looking to add depth to round out the margins, and for Las Vegas, they could look to shore up their backup quarterback spot. As of now, they have capable backups in Nick Mullens and Jarrett Stidham, but one big name is scheduled to work out for them via Adam Schefter of ESPN:

Colin Kaepernick, who last played professional football in 2016 — the year he started kneeling during the national anthem to protest racial injustice — is scheduled to work out Wednesday for the Las Vegas Raiders, league sources told ESPN.

It will mark Kaepernick’s first workout with an NFL team since being exiled, and it will be the first time the former star quarterback visits with a team since he flew to Seattle to meet with the Seattle Seahawks in May 2017 before they passed on the opportunity to sign him.

Kaepernick’s workout with the Raiders will be his first one in the NFL in over five years and his first meeting with a team since he met with the Seattle Seahawks in 2017. Kaepernick’s league exile stems from his protesting of police brutality and racial injustice, but it seems that he may finally be getting his shot at a comeback in Las Vegas.

A workout with the Silver and Black does not guarantee anything, but it is a step in the right direction for Kaepernick, who seems like he would be a quality addition for teams needing a backup quarterback. It will be interesting to see if anything substantial comes out of the meeting.