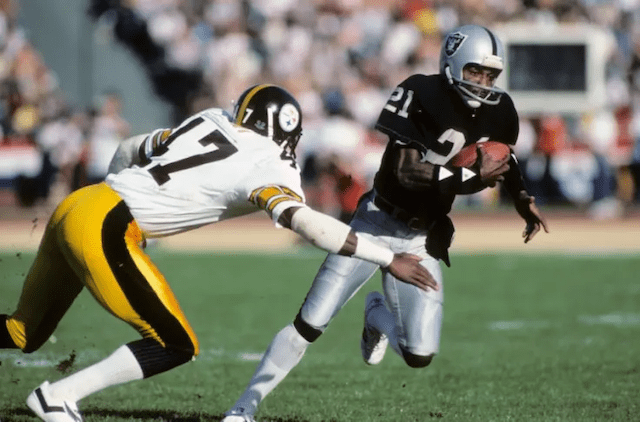 The Pro Football Hall of Fame announced that late Las Vegas Raiders wide receiver Cliff Branch was named the senior committee nominee to be voted on next February.

Branch will need at least 80 percent of the committee’s approval, but historically the senior committee’s nominee is voted in. Branch, unfortunately, died two years ago but now is finally getting his well-deserved place in the Hall of Fame.

Earlier this year, the Raider saw their Hall of Fame waits finally come to an end as Tom Flores and Charles Woodson went into Canton together. Branch has an excellent shot of joining them, which would be a well-deserved honor for the prolific receiver.

Al Davis was well-known for acquiring speed on his rosters, and Branch fit the mold as he was one of the first true speed receivers in the NFL. Branch was taken 98th overall in the 1972 NFL Draft and spent all 14 years of his career with the Oakland/Los Angeles Raiders.

During his time with the team, Branch racked up 501 receptions for 8,685 yards and 67 touchdowns, earning himself four Pro-Bowl nods and three First-team All-Pro selections in the process. In addition, he led the NFL in receiving yards in 1974, as well as led the league in receiving touchdowns in 1974 and 1976. Lastly, he is tied with 12 other players for the longest receiving touchdown in NFL history.

Branch was also a key member of three Silver and Black Super Bowls, capping off his illustrious career and stacking himself up well against the other wide receivers of his generation. The speedy receiver was a problem for opposing defenses as he was able to get behind coverage and score on deep passing plays, making the Raiders one of the more exciting teams to watch.

Hopefully, Branch is voted in and joins the rest of the NFL greats in the Hall as he is more than deserving. If he is inducted, it will be interesting to see which Raider will be next.