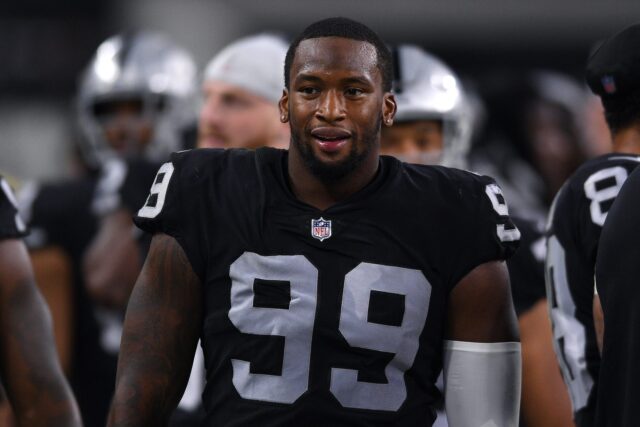 The defensive front of the Las Vegas Raiders looks to be the strongest area of its defense. With Chandler Jones being signed to play on the other side of Pro Bowler Maxx Crosby, the Raiders have the opportunity to wreak havoc on opposing quarterbacks, especially under new defensive coordinator Patrick Graham.

Graham came over from the New York Giants and there have been some questions about the system he intends to run as he has always run a 3-4 scheme while the Raiders have the personnel for a 4-3. But an answer seems to have already been revealed unintentionally by the Raiders’ 2019 first-round pick Clelin Ferrell.

According to Jason Willis of Raider Ramble, Ferrell let it loose that he is an outside linebacker now after being introduced as a defensive end:

In an interview with Popculture, former first-round pick Clelin Ferrell was introduced as a defensive end. Known as a defensive lineman since his days at Clemson, this made sense. Alas, Ferrell quickly corrected the interviewer saying, “Hey I’m an outside linebacker now.”

This revelation all but confirms the switch to a 3-4 defense for the Raiders under Graham as Ferrell has always been considered a defensive end. This also likely means that both Jones and Crosby will be making the switch as well, though Jones has been in that position plenty of times throughout his career.

Perhaps this move could help change the trajectory of Ferrell’s career as the former fourth overall pick has not lived up to being selected that high. Ferrell has totaled just eight sacks and 12 tackles for loss in his three seasons with the Raiders and with some serious competition this season, he will have to fight just to earn a spot on the roster.

The Raiders have declined the fifth-year option on the former Clemson Tiger and with a new regime in place, they have no ties to Ferrell potentially making it easier to let him go. The opportunity will be there for Ferrell to prove his worth as a pass rusher and perhaps this change is exactly what is needed to get his career on the right track.