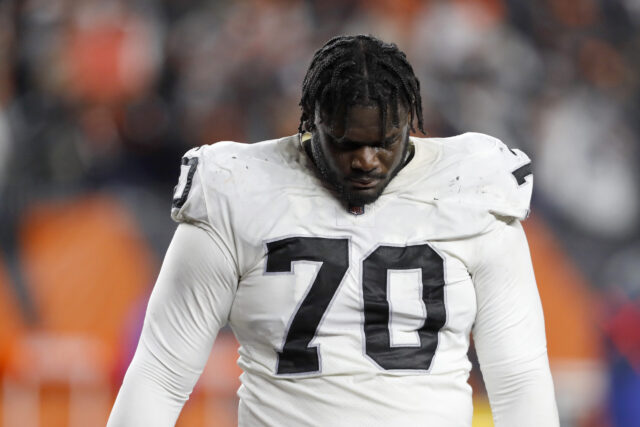 If there is one area of concern for the Las Vegas Raiders’ offense this season it is the offensive line. One of the pieces the team will be relying on heavily is last year’s first-round pick, Alex Leatherwood.

The Raiders were panned almost universally for the selection and the jury remains out on whether or not they made the right choice. And Leatherwood recently admitted that all the criticism did affect him, but he eventually learned to block it out, via Mark Inabinett of Al.com:

“I’m human,” Leatherwood said. “I got emotions. I’m also prideful in what I do. At first, definitely, it was a distraction a little bit. Not anything crazy, but I learned to block all that out and just be where my feet are and focus on me and getting better every day, every day no matter what anybody said because my coaches, my teammates, they all believed in me. I believed in myself.”

Leatherwood’s rookie season was a mixed bag as he started every game for the Raiders last season, but also racked up 13 penalties and allowed eight sacks. Yet the former unanimous All-American spent at least part of his offseason learning from his mistakes:

“Sat down and watched the season all over again and really pinpointed where I could have been better,” Leatherwood said. “The things to work on, but still like I said, everything, but, of course, taking notice of things I could have done better and things like that. That’s how I went about that.”

Exactly where Leatherwood will be on the line this season is still unclear as the coaching staff works out its best combination. Last season Leatherwood started games at both right guard and right tackle and that versatility to play any position is something he has been working on:

“This spring I worked multiple positions,” Leatherwood said. “I feel like it’s just about getting that value of versatility and being able to play wherever the team needs me and stuff like that. It’s been going great.”

Piecing together the right offensive line will be absolutely critical for the Raiders to build on last season’s success. Perhaps no individual along that line will need to see more growth than Leatherwood and the Raiders would be glad to prove everyone wrong about that selection.