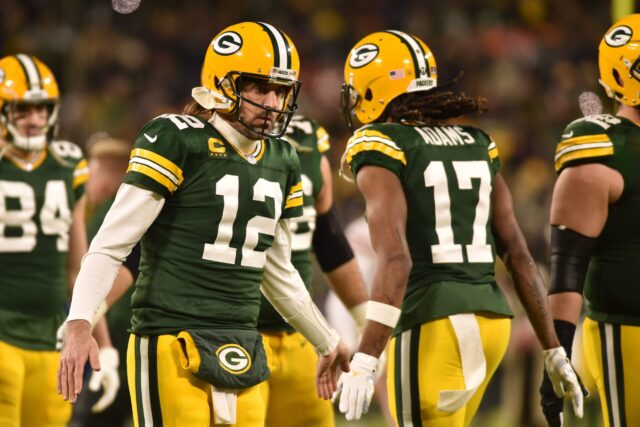 Las Vegas Raiders wide receiver Davante Adams has been in the news recently with one particular statement catching the eye of many. When asked about his move from the Packers and Aaron Rodgers to the Raiders and Derek Carr, Adams said he was going ‘from Hall of Famer to Hall of Famer.’

Adams would then get the opportunity to clarify his comment, saying that what he meant to say was that even if he were going from Hall of Famer to Hall of Famer, there would be an adjustment period. But he also made it clear that he isn’t ruling out Carr as a future Hall of Famer as well; he just has yet to accomplish those big individual and team goals.

From the Aaron Rodgers side, there hasn’t been much said on the statement, but Rodgers was recently asked about going from Adams to Allen Lazard as his top receiver, and the Packers star couldn’t help himself to poke a little fun at Adam’s statement, via Matt Schneidman of The Athletic:

“I mean it’s always tough going from Hall of Famer to Hall of Famer. From Davante to Allen, it’s gonna be a transition, but he’s capable of a lot.”

Rodgers was clearly in a joking mood and simply having a little fun as there seems to be no hard feelings between the two, nor should there be. Adams and Rodgers have been the most prolific QB-WR duo of the past few years, with Adams making five consecutive Pro Bowls and a first-team All-Pro the last two seasons.

Now both Rodgers and Adams will have to move on with new partners and sound excited to do so. Adams and Derek Carr are, of course, former college teammates and close friends, so the relationship is there, and they will look to build on that.

In the case of Rodgers and Adams, they are both moving on to less accomplished players but who have the potential to be great. Adams may have misspoken, and Rodgers had some fun with it, but both will undoubtedly be looking to prove they can continue their success in different situations.