The Raiders called the Jaguars with interest in defensive end Yannick Ngakoue, a source tells Mike Florio of PFT. The conversation happened on Wednesday, but the talks did not go anywhere and nothing seems imminent as of Thursday morning, per that source. Charlie Campbell of Walter Football (Twitter link) was first to relay the Raiders’ interest in Ngakoue. 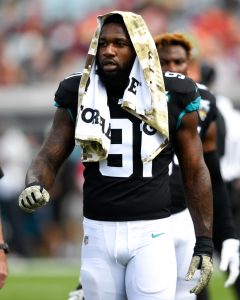 Ngakoue would be costly for Las Vegas, in every sense. In addition to draft capital, the franchise-tagged defensive end is seeking a monster extension that would include substantial cashflow and guarantees in 2021 and 2022. That’s a major holdup for the Raiders and every other team that would be interested in the 25-year-old edge rusher.

Ngakoue has made it clear that he does not want to return to Jacksonville under any circumstances. Earlier this week, he traded barbs with owner Tony Khan, urging him to hurry up and trade him.

The relationship is broken beyond repair and a trade could go down this week. Still, nothing seems imminent and a deal might not get done until the Jaguars significantly reduce their asking price.