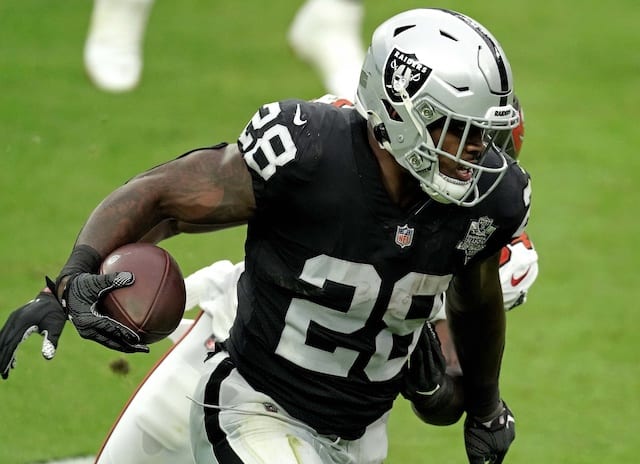 The Las Vegas Raiders are set to host the Indianapolis Colts in Week 14 in a game with some major playoff implications on the line.

The Raiders managed to escape with a clutch 31-28 win over the New York Jets in Week 13 thanks to some late game heroics from quarterback Derek Carr and wide receiver Henry Ruggs III. Regardless, they remain on the bubble for the postseason and must find a way to win out if they want to keep their playoff hopes alive.

Las Vegas suffered some key injuries in the secondary with Damon Arnette and Jeff Heath sidelined with concussions. Meanwhile, they are still holding out hope that the rest of their lineup can return to full strength during such an important week.

According to Vincent Bonsignore of the Las Vegas Review-Journal, Arnette and Heath have both been ruled out while right tackle Trent Brown, starting tailback Josh Jacobs and starting safety Johnathan Abram are all questionable to play:

Damon Arnette and Jeff Heath are OUT for the @Raiders. Trent Brown, Josh Jacobs and Johnathan Abram will be listed as questionable

The loss of both Arnette and Heath leave some rather notable voids in the secondary. As a result, the Raiders are relying heavily on slot cornerback Lamarcus Joyner and backup corneback Isaiah Johnson to step up and fill the void — should the latter manage to overcome his questionable designation.

Fortunately, there is a silver lining in the injury report with Jacobs, Brown and Abram logging in some practice time this week.

Brown has spent the last two months on the Reserve/COVID-19 list and head coach Jon Gruden has expressed some concern regarding his conditioning level. Of course, the Raiders are at the point where they will need all the help they can get in order to make the playoffs.

Jacobs was sidelined versus the Jets with an ankle injury while Abram missed with a knee issue. Their return would undoubtedly provide a much-needed boost on both sides of the ball.