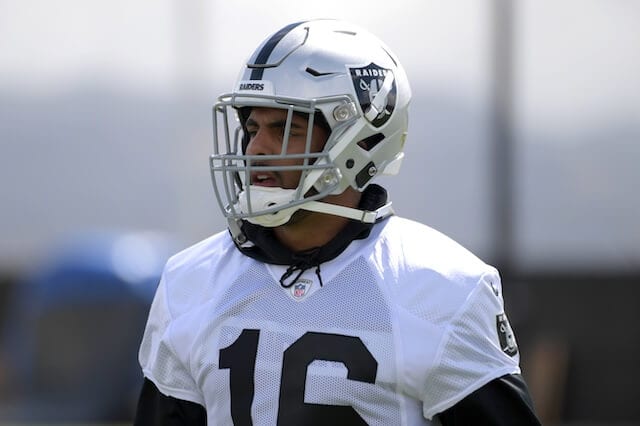 While wide receiver Tyrell Williams was able to suit up in 14 games in his first season with the then Oakland, now Las Vegas Raiders, it was clear he wasn’t 100% healthy for a majority of the season.

Williams made weekly appearances on the Raiders’ injury report due to plantar fasciitis in both of his feet that limited him to just 25 receptions for 435 yards and two touchdowns in his last nine games. For comparison, Williams had 17 receptions for 216 yards and four touchdowns in just four games to begin the season before missing a pair of games with the feet issue.

In a recent interview with Vic Tafur of The Athletic, Williams gave an update on how his rehab is going and while he is making progress, he is not yet 100% healthy:

“Shoot, it’s been a long offseason with my feet. I did two months after the season of just rehab and resting them. It was still taking a long time and I started getting pretty discouraged, but … um, about two months ago, I finally got over the hump and my feet have been feeling good. So I still feel it a little bit, but compared to what I had … it’s nothing compared to what I was going through during the season.

“And it’s still getting better week to week so I am excited for the season.”

Williams also revealed that the pain started in his right foot before moving over to his left as well in the middle of last season:

“Honestly, it started in the right foot during the season and I missed those two games. Then when I came back from that, the left foot kicked in. And then it was both feet for the rest of the season. The right foot got a little better, but the left really didn’t, so it’s all been really weird. Super weird. But now they’re both feeling pretty good.”

Finally, Williams gave some insight into the type of pain he is dealing with for people who are not familiar with the injury:

“It feels like you’re out on concrete doing high-knees straight on to your heels. Just constant … yeah, I don’t even know how to describe it.”

The Raiders had a revolving door at the wide receiver position in 2019 so not having Williams as a consistent presence was a huge loss.

Luckily, they have added a number of weapons to the offense this season, which should help account for Williams or any other receivers missing time if they need to.

Plantar fasciitis is an injury that will only go away with rest, and overworking the feet will only lead to it getting worse. So hopefully Williams’ rehab continues to progress in the right direction and the issues will be gone by the time training camp and the 2020 season roll around.