Nick Kwiatkoski was thought to be on his way out of Las Vegas, but a re-signing could still be a possibility. The Raiders hosted the veteran linebacker yesterday, per Tom Pelissero of NFL Network (Twitter link). 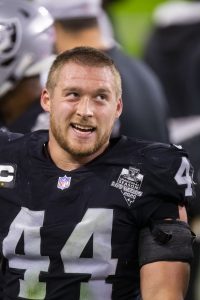 The 29-year-old was released by the Raiders at the beginning of free agency. That brought an end to his two-year tenure with the team – at least, under the contract he signed in 2020, which was restructured twice. As a result of cutting Kwiatkoski, the Raiders created $5MM in dead money.

The team is apparently willing to bring him back at a reduced rate, given this news. In his first year in Vegas, the former fourth rounder took on the largest workload of his career, starting all 12 games he played in. He registered a career-high 81 tackles, adding an interception and four pass breakups. An ankle injury limited him to just eight games in 2021, though.

Kwiatkoski’s first free agent visit was with the Falcons last week. The team’s front office would have some familiarity with him, as recent hire Ryan Pace was the general manager in Chicago when the Bears drafted Kwiatkoski in 2016. However, it was reported at the time that the meeting with Atlanta was the first of multiple sit-downs; on that point, Pelissero adds that Kwiatkoski “has at least one more visit scheduled”. By the end of that third meeting, it may become clearer where he will ultimately land.