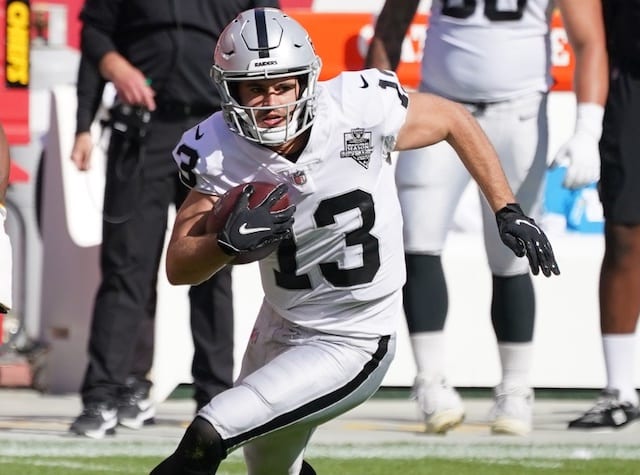 The Las Vegas Raiders have spent this offseason, not only making big outside additions to the roster but also locking down their own cornerstones for the foreseeable future. The latest of those to agree to a new deal was wide receiver, Hunter Renfrow.

The third-round pick is coming off the best season of his career, hauling in 103 catches for 1,038 yards and 9 touchdowns. He was named to his first-ever Pro Bowl and the Raiders rewarded him this offseason with a two-year, $32 million extension.

“Well I’ve said it over and over again, but part of the process of understanding him being a long-term fit was understanding the person. And Hunter is a low-maintenance player who is an incredibly hard worker, very smart, and diligent about his craft […] He’s worked really hard to learn our system and understand our route concepts and learn the intricacies of what he needs to do in this offensive system.”

With Josh McDaniels now manning the sidelines, he brings a completely new system from that of Jon Gruden and Rich Bisaccia. With that new system comes new terminology and concepts that players must adjust to and Renfrow is doing everything possible to pick it up.

With Davante Adams now in the fold along with Renfrow and tight end Darren Waller, the Raiders now have one of the best pass-catching trios in the entire NFL. Add in running back Josh Jacobs and there is no shortage of options for quarterback Derek Carr to utilize.

But fitting in all those pieces within a new system is not easy and everyone must work hard to get on the same page. Renfrow is showing that he will put in the work to succeed and that is clearly standing out to Ziegler and everyone else within the Raiders organization. This is shaping up to be an excellent season for the Raiders and Renfrow is doing everything in his power to make sure he does his part to get this team to the next level.