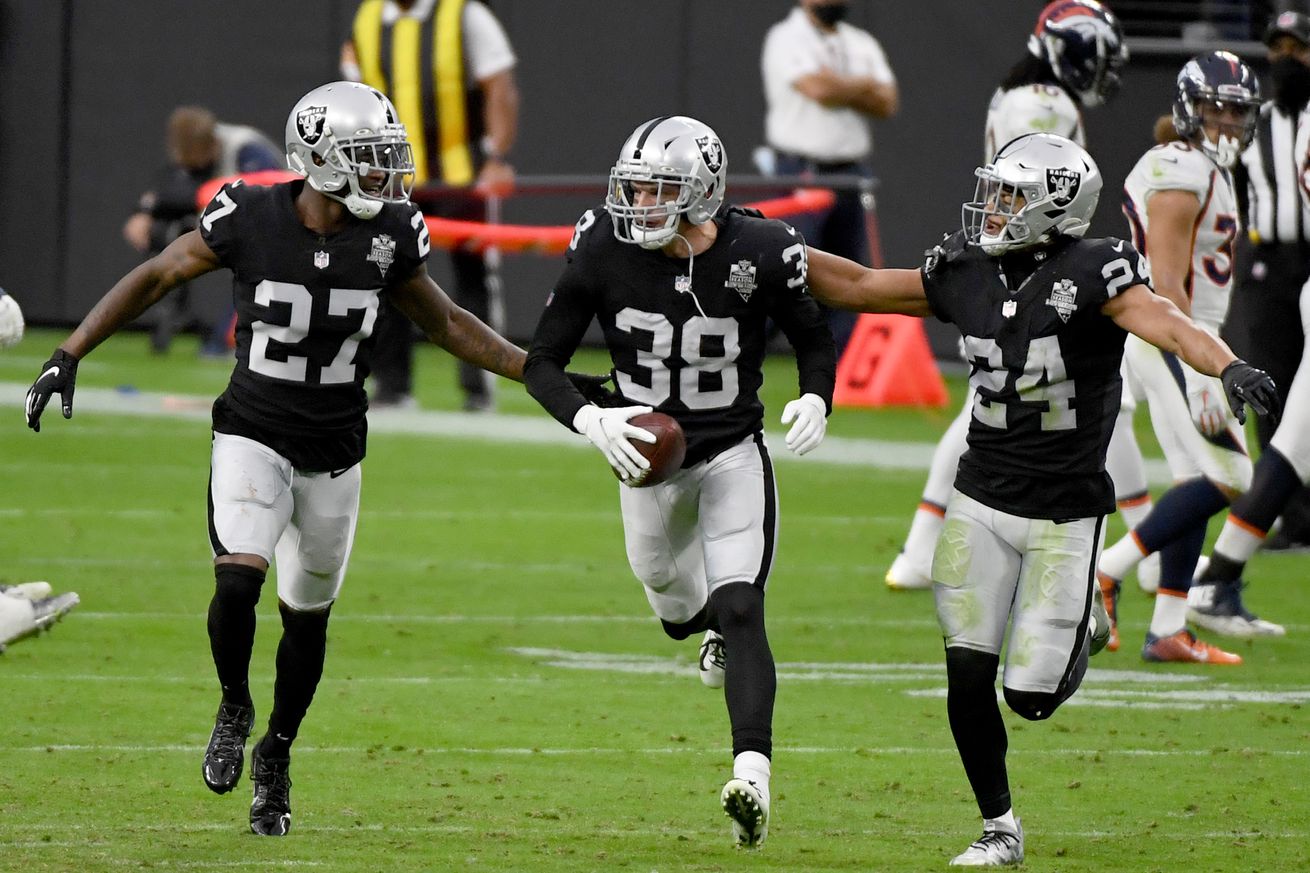 The most this franchise has had in a game since 2013

It was three weeks ago that we pointed out the low number of turnovers forced by a Paul Guenther defense. Through the Raiders’ first five games of the season, Las Vegas had only forced three turnovers total. They forced one each in the two games following that piece, but on Sunday against the Denver Broncos, they forced five.

That doubles the Raiders’ takeaway figure on the season from five to 10.

Broncos quarterback Drew Lock is proving not to be the answer for Denver and he threw six interceptions in the four starts prior to facing Las Vegas this week. That came further off the rails beginning in the first quarter when Jeff Heath picked off Lock’s errant pass at his own 37 and returned it 24 yards.

On Denver’s next drive, Nicholas Morrow sacked Lock and forced a fumble, though Lock brought it back in. That type of ball security went out the window with the Raiders leading 10-6 and the Broncos driving deep into Las Vegas territory with only seconds remaining in the first half. Heath again intercepted Lock, this time taking points off the board and making sure the Raiders had a four-point lead at the break.

Then on the first play of the fourth quarter, with the Raiders leading 20-6, Las Vegas defensive end Carl Nassib took full advantage of another poor decision and throw by Lock, intercepting it and returning the ball 23 yards.

Shortly later, leading 23-6, Nevin Lawson stripped DaeSean Hamilton and came away with the recovery too, setting up a Devontae Booker touchdown run to make it 30-6.

A different kind of Vegas strip @nevin_lawson set us up for another TD with this beautiful forced fumble.#DENvsLV | CBS pic.twitter.com/vQqtI73fL2

Finally, on the most impressive defensive takeaway of the game, linebacker Nick Kwiatkowski one-hands a desperation throw by Lock to create a fifth turnover.

Look who would have had a THIRD interception if not for Nick Kwiatkoski… pic.twitter.com/7TQb0C51fA

Kwiatkoski, Heath and Nassib were all offseason signings and the veterans combined for four turnovers this week. That alone would be the most forced by a Raiders defense since Week 4 of 2018 (which was an overtime game against the Browns) and five turnovers is the most the franchise has had since Week 5 of the 2013 season.

The Raiders are now fourth in points per drive, but giving credit to the offense without a hat tip to the defense would be a disservice.