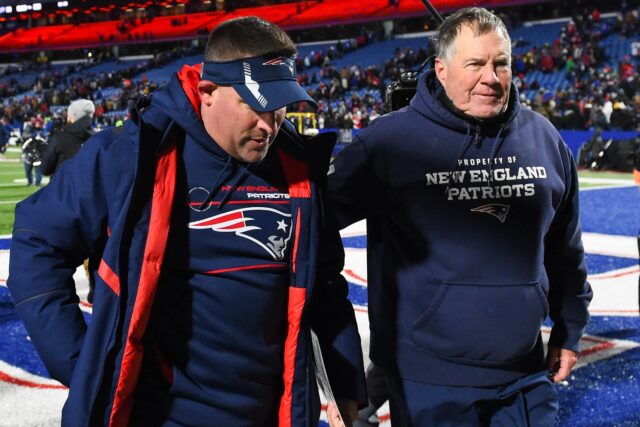 In his second opportunity, new Las Vegas Raiders head coach Josh McDaniels is looking to prove he is capable of running his own team. His first stop more than a decade ago with the Denver Broncos lasted less than two seasons, but he is looking to have much more success with this Raiders team that looks to be on the brink of true contention.

McDaniels’ tenure with the Broncos is one of many instances of assistants coming from the Patriots under the Bill Belichick tree and struggling to replicate the success he has garnered in New England. But McDaniels has made it clear that he is not trying to be Bill Belichick with the Raiders, just himself, via Adam Hill of the Las Vegas Review-Journal:

“I’m not Bill (Belichick), and I can’t be, so I’m not going to try,” McDaniels said last week after a practice during organized team activities. “I just want to try to be myself and hopefully I can be a good leader for our team.”

It is likely a mistake many make in all of sports when coming from under the umbrella of a legendary coach. Instead of putting their own spin on things, they try too hard to do exactly what was done elsewhere, and it just doesn’t work. In fact, McDaniels believes that was a mistake he made in his first opportunity:

“I didn’t know this awhile ago, but it’s hard for anybody to leave there and try to replicate everything that happens there,” said McDaniels, who spent 18 seasons on Belichick’s staff. “And it’s probably true across the board in all of sports, and I made the mistake of trying to do too much of that the first time. I think you’ve just got to be able to be yourself.”

What Belichick has done in New England and the way in which he operates works perfectly for him and has yielded an unbelievable amount of success, so it makes sense that others would want to try and do the same. But it simply isn’t possible to replicate, and McDaniels realizes that now.

McDaniels will undoubtedly take certain aspects from his time in New England, but making them work in his own way, under his vision, with his personality, will hopefully be the difference between his time with Denver and what he hopes will be a much longer and more successful run with the Raiders.