Alabama will likely have two receivers drafted in the top 20 Thursday night. The faster of those two talents has generated interest from several teams with mid-first-round selections and clear wideout needs. 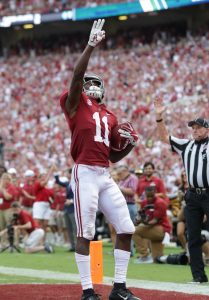 The 49ers, Broncos, Raiders and Eagles have contacted Henry Ruggs the most, the ex-Crimson Tide speedster told Ian Rapoport on the RapSheet and Friends Podcast (Twitter link via NBC Sports Philadelphia’s John Clark). The Raiders, 49ers and Broncos pick at Nos. 12, 13 and 15, respectively, while the Eagles possess the No. 21 selection.

Ruggs has sub-4.3-second 40-yard dash speed. While he was not as productive as Jerry Jeudy, there could be a genuine chance he goes off the board before his former teammate. The Jets, who pick 11th, have also expressed interest in Ruggs. But they are believed to be zeroing in on tackles over wideouts. However, if the Dolphins are in play for a tackle, teams with mid-round picks hoping to land one of the coveted top four at the position could be in trouble.

The Raiders and 49ers carry two first-rounders and possess clear receiver needs opposite Tyrell Williams and Deebo Samuel, respectively. A player like Ruggs would make sense for a Broncos team that rosters the 6-foot-4 Courtland Sutton. The Broncos have been linked to a trade-up, but for Jeudy and not Ruggs. As for the Eagles, they have been connected to receivers throughout the pre-draft process. But at this point, it is looking like Philly will have to move up from No. 21 to land Ruggs.