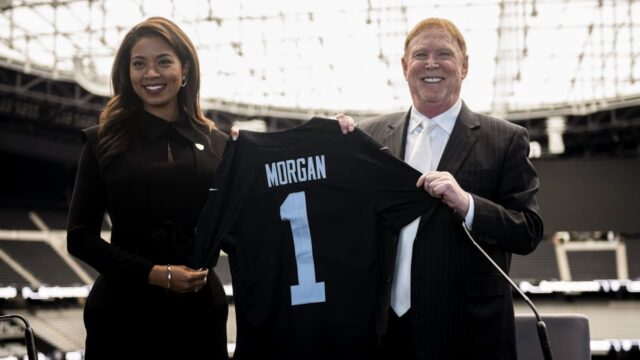 The Las Vegas Raiders made a historic hiring recently, announcing Sandra Douglass Morgan as the franchise’s new team president. The hiring makes Morgan the first African-American woman ever to hold that position in NFL history.

Morgan won’t just be resting now that she has the position, however. She recently made an appearance on Good Morning America and spoke about her desire to get started and help the Raiders franchise in any way she can, via Levi Edwards of Raiders.com:

“I just really can’t wait to dig in,” Morgan told GMA’s Amy Robach. “Get to know the people, Raider Nation, and do what we can in the front office to support the team.”

The Raiders have made some major moves this offseason, and there is a lot of positive momentum surrounding the franchise heading into the 2022 season. All eyes will be on the AFC West, which many view as the best division in football, and the Raiders are a popular pick to come out on top.

Morgan recognizes the positive momentum the Raiders have going right now and can not wait to see how things play out once the season begins:

“The buzz around the building with Training Camp coming up – we have a new coach, a new GM, amazing players that have signed or re-signed and extended agreements, so we’re just so looking forward to again having the front office support, the commitment to excellence we see, on the field every day,” said Morgan. “I just can’t wait to have this new season. Full stadium at Allegiant Stadium, our fans are the best, our employees are the best.

“We’re ready to go and just ready to kick it off.”

In addition to the hiring of Josh McDaniels as the new Raiders head coach, and Dave Ziegler as general manager, the Raiders added some big-time players on the field as well. Most notable was the team’s acquisition of star receiver Davante Adams from the Green Bay Packers and the signing of pass rusher Chandler Jones in free agency.

Add in extensions for the likes of quarterback Derek Carr and defensive end Maxx Crosby, and it’s easy to see why the Raiders are a popular pick to make a leap after last season’s playoff appearance.

And now, the historical hiring of Morgan as team president continues what has truly been an outstanding offseason for the Raiders franchise as a whole.