Marcus Mariota took a pay cut in order to stay with the Raiders. But, in exchange, the backup quarterback received a no-trade clause, according to a league source who spoke with Greg A. Bedard of the Boston Sports Journal (on Twitter). 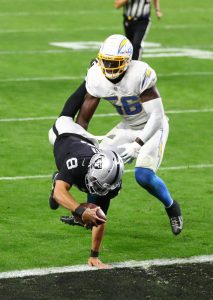 Mariota was originally set to earn $10.725MM, a hefty price for a QB2. Rather than getting released or traded, he agreed to lower his salary to $3.5MM. Of course, Mariota’s new deal makes him much more attractive to teams in need of QB support, so Mariota insisted on maintaining some control over his future.

No-trade clauses are pretty rare in the NFL. As of late February, these were the only nine players in the NFL with veto power in their contracts:

Now, Mariota is an unexpected member of the club, so any teams with interest in the former second overall pick may have to look elsewhere.