A year after trading All-Pro guard Kelechi Osemele to the Jets in a pick-swap deal, the Raiders shopped Gabe Jackson for a mid- to late-round pick, Vic Tafur of The Athletic notes (subscription required). 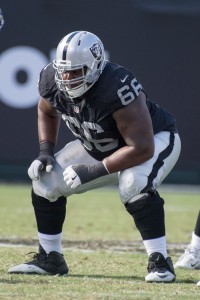 “I hadn’t heard anything, and you never know,” Jackson said Monday, via Tafur. “It was a weird feeling, but I am very happy to be back.”

Although Jackson has missed eight games over the past two seasons due to injury, he has enjoyed a solid career. The 28-year-old blocker joins Derek Carr as the Raiders’ longest-tenured starters, with each having debuted in the team’s lineup in Week 1 of the 2014 season. Jackson and Carr signed extensions days apart in June 2017. Pro Football Focus has continually slotted Jackson as an above-average guard, placing him in the top 15 at the position as recently as the 2018 season. The former third-round pick missed five games because of a knee malady last season.

The Raiders were busy on their interior line this offseason. They extended Richie Incognito and re-signed Denzelle Good and Jordan Devey. They also signed Eric Kush and traded up in the fourth round for Clemson guard John Simpson. The latter, an All-American in 2019, could be viewed as an heir apparent to either Jackson or the soon-to-be 37-year-old Incognito. Jackson is signed through 2022 but has no guaranteed money on his deal after 2020.