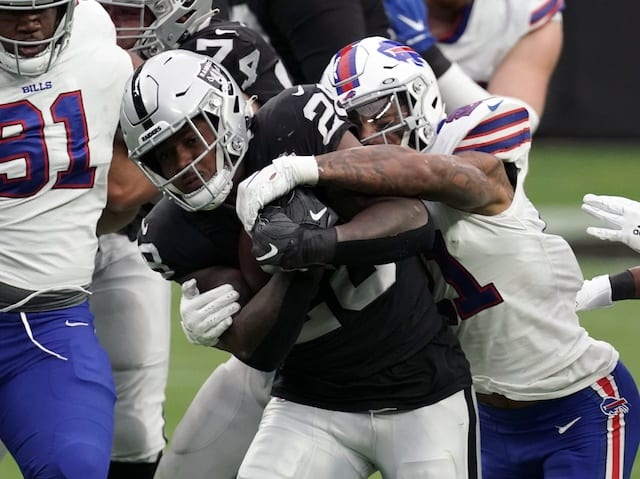 The Las Vegas Raiders’ schedule has been a gauntlet to start the season, and that continued in Week 4 when they welcomed the undefeated Buffalo Bills to town.

While the Raiders kept up with them for most of the day, a pair of turnovers and a turnover on downs in the second half proved to be costly in the 30-23 loss to fall to 2-2 on the year.

It’s now back to the drawing board for Jon Gruden and the Raiders, who have another tough matchup against the Kansas City Chiefs in Week 5.

Before moving ahead though, Gruden gave some praise to his team for battling and staying in the game despite trailing the Bills all day, via Levi Edwards of Raiders.com:

“Buffalo was an outstanding team,” Coach Gruden said. “They’re 4-0 for a reason. But I’m really proud of our guys. … Credit Buffalo; they got a good defense.

“We’ll look at the film, but we tried to stay aggressive. We have a good, young team, and we’re playing a lot of people. I really proud of our first quarter (of the season). Anybody who’s played a tougher schedule than us then tell me who has.”

Raiders running back Josh Jacons, who had 15 carries for 48 yards and three receptions for 25 yards, echoed Gruden’s thoughts about the game and this team:

“This team is different than last year, and I’m proud of the guys because they fought until the end,” said Jacobs. “At the end of the day they get my respect for that. Each player is stepping up and making big time plays and they’re trying to give their best and give their all.”

After fumbles by both Darren Waller and Derek Carr, the Raiders found themselves trailing 30-16 late in the fourth quarter. As Jacobs mentioned, they didn’t quit and got it to within one score after a late touchdown by Nelson Agholor with 1:29 left.

They failed to recover the ensuing onside kicker, however, so that was as close as they would get.

After facing the Chiefs, the Raiders’ schedule will get easier so facing a bunch of early difficult opponents could end up benefitting them down the road.