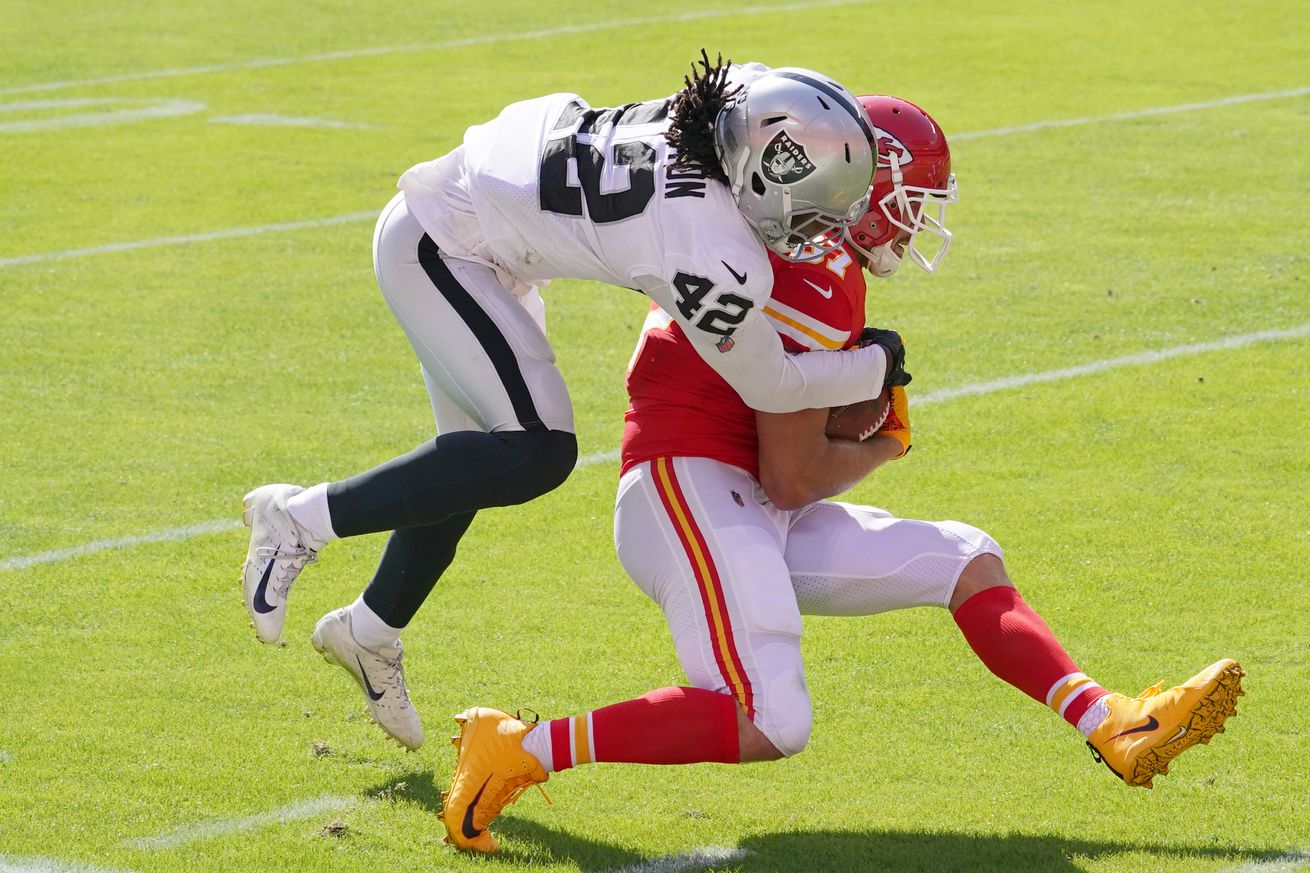 A quick look at the Raiders-Chiefs Week 5 game

Damn, that was a wild one! The Raiders held out and delivered the Chiefs their first loss of the 2020 season — and with it, Derek Carr’s first win at Arrowhead Stadium in Kansas City.

As we let that soak in, here’s a review of the Las Vegas Raiders’ 40-32 win at the Kansas City Chiefs on Sunday.

They did it!
Derek Carr had a great game, the defense came up big and the Raiders won at Arrowhead Stadium for the first time in eight years. And Carr finally got that monkey off his back by earning a W in KC.

It’s a race:
Instead of being down by three games to the Chiefs, the 3-2 Raiders are one game behind the 4-1 Chiefs in the AFC West.

Great defensive effort in second half:
The Raiders defense improved greatly in the second half, totally dominating Patrick Mahomes and the Chiefs’ great offense.

Banged up secondary:
Slot cornerback LaMarcus Joyner went down on the first play of the game with a leg injury. He was replaced by rookie Amik Robertson. Joyner did eventually return. Also, safety Erik Harris hurt his hand on the first series and replaced by Jeff Heath. Harris also returned.

Early break:
Chiefs’ quarterback Patrick Mahomes hit receiver Tyreek Hill for a long touchdown on the first drive, but it as nullified by a penalty and the Chiefs had to punt the ball.

Welcome back, kid:
On the Raiders first drive, Derek Carr hit rookie Henry Ruggs III for a 44-yard play on third and 10, which set up a field goal. Ruggs had missed the past two games with a hamstring injury,

And then …
The Raiders took the 24-21 lead late in the second quarter on a 72-yard bomb from Carr to Ruggs as the Raiders took a 24-21 lead, erasing a 14-3 deficit. The return of Ruggs definitely changes up this offense.

Better pressure:
The Raiders, led by Maxx Crosby and Carl Nassib, had a better pass-rush early than in the previous first four games.

What a terrible interception:
Carr was picked off late in the first quarter and he had Josh Jacobs wide open. Carr was clearly pressing to start the game. It set up a Chiefs’ touchdown to make it 14-3.

What a response:
On the Raiders’ next drive, Carr hit Nelson Agholor for a 59-yard touchdown bomb. See, he can do it.

Look at Booker:
Raiders’ backup running back Devontae Booker had a 43-yard run in the second quarter. If he can keep it up, that’s a heck of a weapon behind Jacobs. It set up a touchdown pass from Carr to Darren Waller to make the score 21-17.

Big flags:
The Chiefs had two touchdowns erased by penalties in the first half and they still scored 24 points in the half.