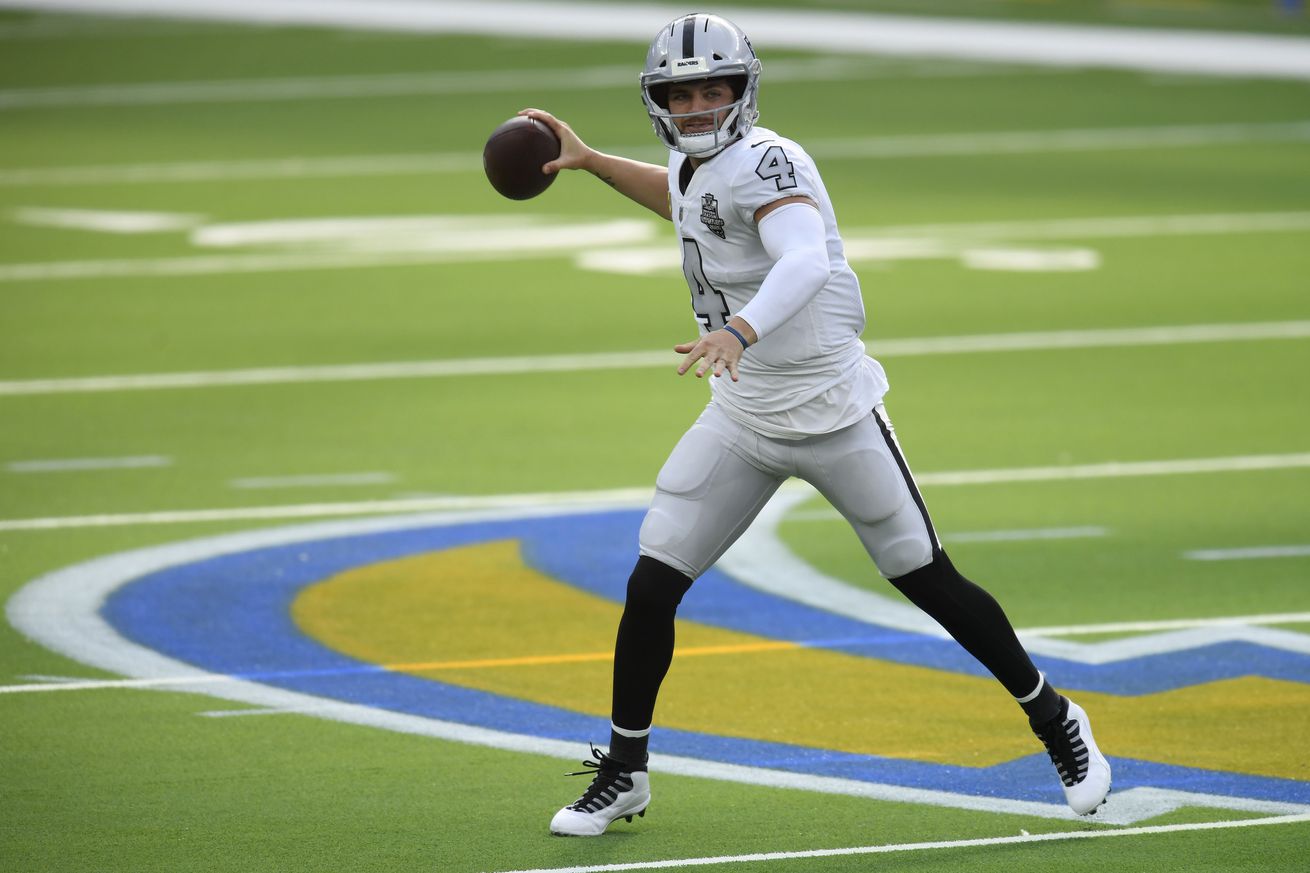 The Las Vegas Raiders pulled off a crazy win at the Los Angeles Chargers on Sunday despite a nail-biting attempt by the Chargers to reserve their habit of giving up halftime leads.

Here’s our instant review of the action Sunday afternoon from SoFi Stadium that ended with a Raiders 31-26 victory.

That was close:
The Raiders won on an overturned pass play on the final play of the game. Your Raiders are now 5-3.

Big play by Kwiatkoski:
Having a solid day overall, Las Vegas linebacker Nick Kwiatkoski tackled Chargers’ now-backup quarterback Tyrod Taylor on a two-point conversion to keep the Raiders’ lead at 28-25 in the fourth quarter. Taylor was playing for Herbert, who missed a play because he was shaken up.

Big turnover:
The Chargers fumbled a punt at their 30 in the fourth quarter and the Raiders recovered and turned it into a field goal to take a 31-26 lead late in the game.

Terrible turn of events:
For some reason, Raiders coach Jon Gruden decided to try a pass play deep in the Raiders’ territory at the end of the first half and quarterback Derek Carr was sacked and lost a fumble. The Chargers then connected on a field goal to take a 17-14 lead at the half. It was all just brutal.

Agholor strikes again:
The Raiders responded to their blunder well as Carr hit Nelson Agholor on third and long for a long touchdown play to give the Raiders a 21-17 lead. Rookie wide receiver Bryan Edwards was active for the first time since hurting his ankle in Week 3. Yet, Agholor, who replaced Edwards in the starting lineup, started against the Chargers. Expect Edwards’ playing time to increase soon.

Big third quarter:
After the Agholor touchdown, the Raiders came back and had an explosive drive in which Carr looked like a Hall of Famer. He made a great ground play on a 53-yard pass to Hunter Renfrow. Then, he leapt for a first down before ending the drive with a touchdown pass to tight end Darren Waller to give the Raiders a two-score lead.

Ferrell looked good:
Raiders’ defensive end Clelin Ferrell had a strong start to the game, which is encouraging. He has been inconsistent for much of his short career.

Power of the backup RB:
On their second drive of the game, the Raiders got 19 yards on a third-and-10 pass play from Carr to Jalen Richard. On the next play, Devontae Booker scored from 23 yards out to give the Raiders an early 7-0 lead. That’s nice work by the backups.

Gutsy call:
The Chargers went for it on fourth and two near the goal line and scored to tie the game at 7-7 early in the second quarter on a drive that quarterback Justin Herbert and wide receiver Keenan Allen dominated.

Mullen hurt:
Starting cornerback Trayvon Mullen left the game in the second quarter with a hamstring injury. Isaiah Johnson replaced him and made some plays and he was instrumental on the final play of the game.

Run offense working:
The Raiders’ battered offensive line struggled early in pass protection, so the Raiders ran the ball and ran it well, averaging nine yards a carry for much of the first half as Booker and starter Josh Jacobs both had touchdown runs in the first half.

Getting pressure:
The Chargers have the worst offensive line in the NFL and the Raiders took advantage and had some strong pressure, which has been a problem for most of the season.

Ingold hurt:
Raiders’ fullback Alec Ingold left the game with a rib injury in the second quarter. He was hurt on Jacobs’ touchdown run.