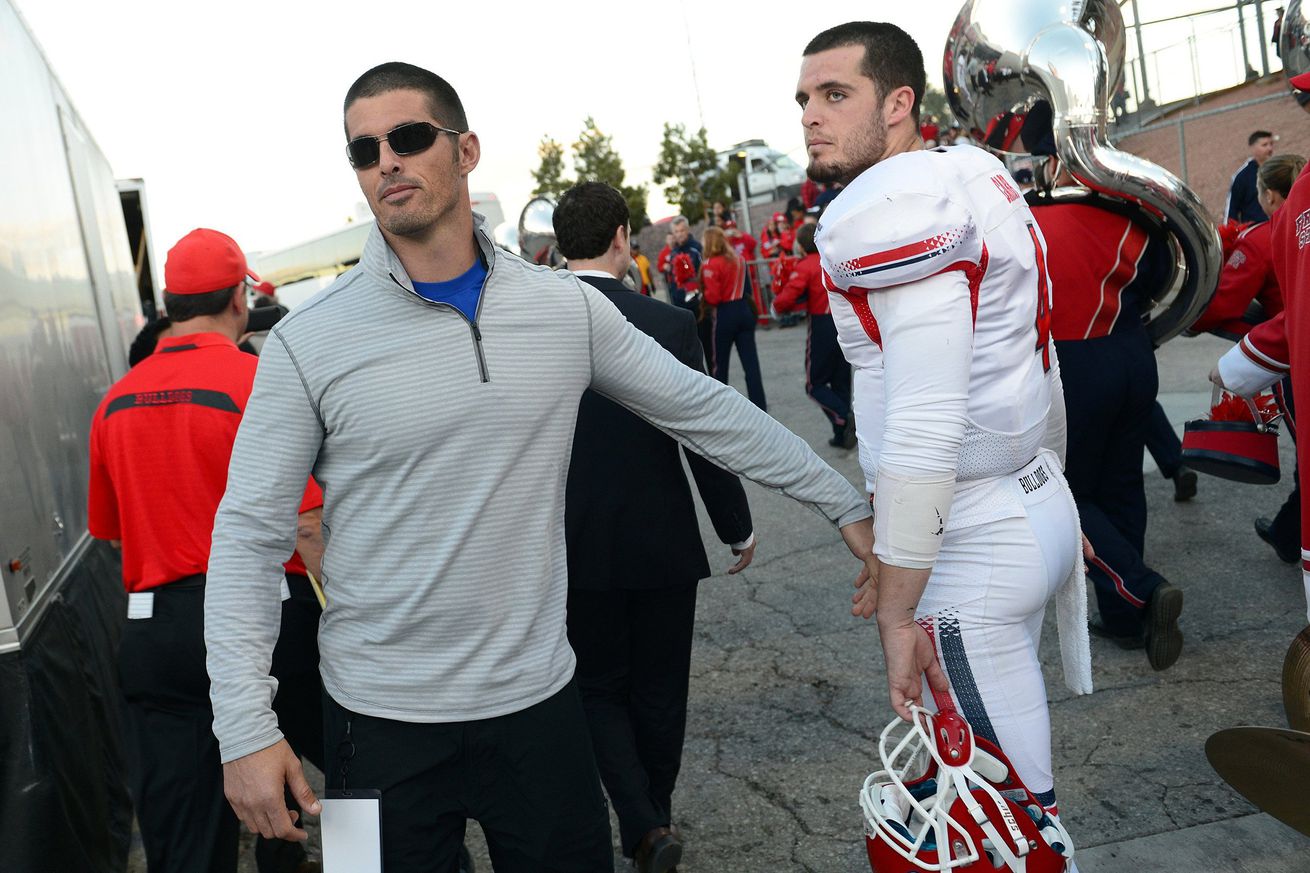 The reigning CIF 3-A State Champions in California are the Bakersfield Christian Eagles. The win was their first state championship in school history, coming three years after reaching the final game and losing in 2016. The head coach in both of those games was Darren Carr, who was hired in 2015, which is also when he hired his brother David to be offensive coordinator. Seeing their high school athletes win a championship last year must have been thrilling, a life highlight that is probably up there with being drafted as the number one overall pick in 2002, which is an experience that the eldest brother David once had with the Houston Texans.

Twelve years later, their youngest brother Derek — a graduate of Bakersfield Christian in 2009 — was made the 36th overall pick and he has spent the last six seasons as the almost-unquestioned starter of the Oakland Raiders. It wasn’t until 2019 that Derek officially passed his brother David in career starts, but in many ways the two are still linked, not only as family members but as football players.

Believe it or not, in his final full season David Carr led the NFL in completion percentage at 68.3%. His completion percentage +/- (his rate compared to the average that season, with 100 being average) was 128. The problems for David, which included his offensive line (most-sacked player in 3 of his 5 seasons) and lack of talented personnel around him other than Andre Johnson, resulted in him throwing only 11 touchdowns on 442 attempts.

Consider that in 2006 Michael Vick had 20 touchdowns on 388 throws (plus 1,039 rushing yards) and Tony Romo had 19 touchdowns on 337 attempts. Even Joey Harrington and Vince Young had thrown more touchdowns on fewer attempts than Carr that season. Carr was below average or bad in almost every category except completion percentage and passer rating, which had him at 101 in +/-.

Over his five seasons with the Texans, Carr ranked 24th out of 26 quarterbacks (minimum 1,200 attempts) in passer rating ahead of only Harrington and Eli Manning. He had been sacked almost 50 times more than second-place Drew Bledsoe. He was 23rd in yards per attempt and 24th in adjusted yards per attempt. And he was dead last, 26 out of 26, in touchdown percentage.

From 2002 to 2006, a Peyton Manning pass attempt was more than twice as likely as a David Carr pass attempt to result in a touchdown. Both were former number one picks and don’t let his pro track record fool you, Carr was an exceptionally touted quarterback prospect. Though I’m obviously not one to ignore Carr’s obstacles that included the offensive line and lack of weapons, he was also coached by Gary Kubiak, a future Super Bowl-winning head coach with the Denver Broncos. Offensive coordinator Troy Calhoun has enjoyed unprecedented success as the head coach at Air Force. And among the assistants were wide receivers coach Kyle Shanahan and former Green Bay Packers head coach Mike Sherman.

Nothing that Houston could do for Carr was enough and in 2007 he went to the Carolina Panthers. Carr started four games and he threw at least one pick each time. He never crossed over 155 passing yards in any of those contests, which included a 41-attempt game against the Tampa Bay Buccaneers. An abysmal performance against the New Orleans Saints became his final NFL game as a starter.

And that’s a brief synopsis of David Carr. We already know that Derek is not going to face the same level of criticisms as his brother did.

Derek Carr is a three-time Pro Bowl quarterback, though that number may say more about the Pro Bowl than it does about the QB. During his three-year stint in the Pro Bowl, Carr ranked eighth in touchdown passes but 16th in passer rating and 24th in yards per attempt, almost the same as his brother about a decade earlier.

But Derek has also succeeded in plenty of ways that his brother didn’t. First of all, he isn’t only not getting sacked, Derek is one of the least-sacked QBs in the NFL. Much of this has to be attributed to the play of his offensive line, but arguments for sacks as a “QB stat” are valid and Derek is not putting himself in the way of trouble very often. This means perhaps that he isn’t taking some necessary risks, but this is a major difference between the brothers.

Additionally, Derek was actually above average in every major category last season other than TD%, which he was a little below average in. Derek’s +/- for TD% in 2019 was 95. David’s was 83 during his final season with the Texans and he never once got higher than 92. Derek’s only ever dipped that low in 2018 (89) as the team was transitioning into the next Jon Gruden era.

There are obvious reasons to compare David and Derek, but he is certainly not the best comp for the Raiders current starter. Instead that distinction may fall on a different quarterback who has his own type of familial bond with Derek. As teammates. New teammates.

O’Brien was a former first round pick of the New York Jets who made the Pro Bowl in his second season when he led the NFL in passer rating at 96.2. His interception rate spiked in year three, but O’Brien led the NFL in interception percentage three times in his first five seasons. From 1985-1988, O’Brien was arguably more statistically impressive than future Hall of Famers Warren Moon, Jim Kelly, and John Elway and he did so on a comparable number of attempts.

But there was no Pro-Football-Reference back then and fantasy sports were only played in basements by people who shared the same neighborhoods. Elway took the Denver Broncos to the Super Bowl in ‘86 and ‘87 and that’s just one reason why a lot more people know about him than O’Brien, who went 0-2 in his playoffs career.

Another reason is what happened after ‘88.

O’Brien led the NFL in sacks taken in 1989 and he threw 12 touchdowns against 18 interceptions over 15 games. The Jets fired the head coach after a 4-12 season and hired Bruce Coslet, the offensive guru from the Cincinnati Bengals, while also spending the top overall pick in the supplemental draft on receiver Rob Moore, a pretty good player in his own right and a future receivers coach for the Raiders. The changes to the team did practically nothing to change the trajectory of O’Brien’s career and though he made the Pro Bowl in 1991 (throwing 10 touchdowns and 11 interceptions that season) he was also essentially finished as an NFL starter.

What do any of these comps say about Derek Carr?

Obviously, Derek has to speak for himself on that matter. The bad news is that players like David Carr, O’Brien, Mariota, Stan Humphries, Chad Pennington, and Jay Cutler never really got better with age, experience, or changing things around them. In those cases, the results were almost always as expected. The good news is that Ken O’Brien was once maybe better than John Elway — in some respects, at least — and Elway did improve with time. Tannehill had a comparable start to his career as Carr and perhaps now changes in coaching and personnel will amp his play in his 30s.

Las Vegas has given Derek Carr coaching, an offensive line, and as of the last 12 months or so quite a few new weapons. This is it, there is no “future” talk anymore when it comes to Carr. It has to be about what is happening in the present and if he can elevate his team in ways that his brother never could.

Or perhaps in ways that his brother — the state championship coach for a school that never dreamed that big before — recently has.

You really can’t explain it.. so this is honestly with 100% accuracy the best way I can show you what happened that warm sunny day in Bakersfield, Ca .. enjoy a look into our family’s most historic battle:@Dameshek @DCarr8 @derekcarrqb @SheralynCarr @Melody_Carr @carr_rodger pic.twitter.com/grpQszZlqP